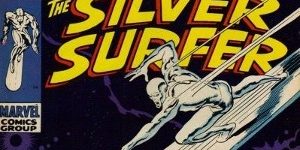 Hi gang!  This week is going to have to be a new/old RETRO REVIEW, so I present The Silver Surfer # 4, from Marvel Comics, cover dated February 1969.

First you are hit by the great John Buscema cover, featuring the Silver Surfer streaking at the Mighty Thor, who is poised to slam the Surfer with his hammer.  The cover inks are supplied by John’s brother, Sal Buscema!  The heroes pop from the black and purple background.  The cover alone screams, buy me, and I did when it came out back in 1969! 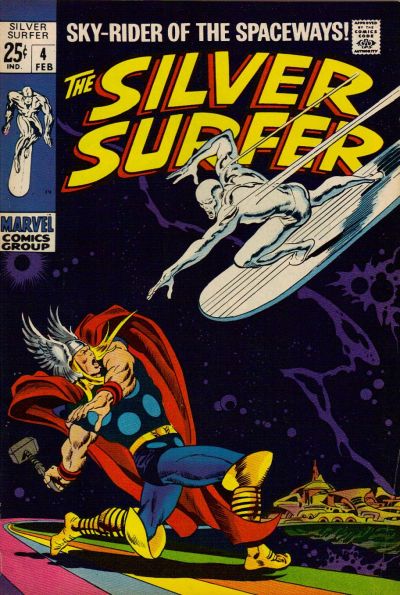 The story within is entitled; “The Good, The Bad, and the Uncanny!”, written by Stan Lee and pencilled by cover artist, John Buscema.  The interior inks are also supplied by his younger brother, Sal and the letterer is none other than Artie Simek, one of Marvel Silver Age greats.

The story opens with Thor’s brooding brother, Loki.  He determines that it is once again time to eliminate his brother, Thor, once and for all.  Loki frees his mystic essence and looks for someone who has a chance of slaying Thor.  He considers the Hulk, but says he’s lacking in skill.  He goes on to consider the Thing, as well as, Hercules, but decides against each of these, as well.  Then he stumbles upon the Silver Surfer, and determines that the Surfer’s cosmic power may be able to settle Thor once and for all.

Loki puts the Surfer to a test and the two of them battle for six or seven pages, beautifully drawn by Big John Buscema!  He tricks the Surfer into thinking that Thor is challenging the throne of Asgard and then offers to free him from Galactus’ curse, thus allowing the Surfer to return to his love, Shalla Bal.

The Surfer enters Asgard with the help of Loki, and challenges Thor.  Loki is up to his usual tricks and makes it appear that Thor has used someone to attempt to kill the Surfer, which sets off a battle royal between the Surfer and Thor!  They have at it for multiple pages, until it is revealed that Loki has duped the Silver Surfer and Loki has to banish the Surfer back to Earth to save himself.

The story isn’t really that special, as by the end, the status quo has been re-established, with the Surfer trapped once again on Earth and unable to sail the spaceways!  But the art is grand and Stan Lee shows that he really loves the Surfer and provides wonderful dialogue for both the Silver Surfer and the Asgardians.  Plus at the time, it provided a chance for John Buscema to show what he could do with Thor and his cast, which he’d be forced to draw soon, when Jack Kirby left Marvel.  He excelled too!

All in all a pretty nice issue of the relatively new comic book.  Hope you enjoyed my look back and please return next week for another Fabulous Find.  Til then … be seeing you …