Piggy Cook’s Journey To The West 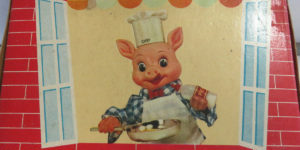 Welcome back to Consigned, Cool, & Collected, where we look back into the history of the cool stuff we see on the daily. Today, we’re looking at the Piggy Cook toy from our eBay store, an electronic toy from the 1950s that represents a proud legacy of Japanese toy making.

After World War II, Japan was in a bit better of a position than most of the belligerents in that conflict due to having not been invaded or even as extensively bombed as many European states (being an island chain is strategically advantageous). Their transfer of power to a less warlike government was also considerably more peaceful, meaning they were able to socially recover fairly quickly. All this lead to their rise in the 1950s as manufacturing hub, particularly for toys and electronics.

It is in this environment that Yonezawa Toys was founded in Tokyo. Unfortunately, more specific history has eluded me in my research. I blame the fact that the company is Japanese, meaning the availability of English information is based on the dedication of translators, and that they were purchased by bigger corporation (a running theme of late) with a much more recognizable name in the west. Even so, they’re worth looking at.

Yonezawa Toys quickly became they largest toy maker in Japan, distinguishing themselves with higher quality and more creative designs for robots and tin toys. Distributed in the U.S. as “Yonezawa-STS”, the true gems of their output were battery operated electronic toys. Our Piggy Cook, for example, jauntily leans left and right as he seasons and flips his eggs over the glowing red light-bulb of his stove.

While bacon that cooks eggs is fun, Yonezawa was best known for their robot toys. Like most toy manufacturers of the fifties and sixties, they would court space-crazed children with  tin robots, astronauts, and space vehicles. They would fade from prominence in the 70s, though not without attempts to reclaim their glory by getting into the vinyl Kaiju toy market.

Most fan sites for tin toys take for granted that Yonezawa Toys died out some time in the seventies, but that’s not true. That may be when they stopped widely exporting toys, but they survived until at least 1991. In that year, they were purchased by video game giant Sega and rebranded as Sega-Yonezawa. That state of affairs would continue until 1998, when the company was reorganized as Sega Toys. They still produce toys based on cartoons and video games (primarily Sega titles, naturally), but their best known creation to cross the pacific would be the mid-00s iDog MP3 player accessory – an electronic dog that “danced” along to the tunes from your music player.

The modern output of Sega Toys doesn’t seem nearly as charming as the vintage products of Yonezawa Toys, but who knows what we’ll be thinking in fifty more years? What seems dated and dull to one person is kitschy nostalgia to another, which is why it doesn’t hurt to let folks with their finger on the pulse look at your collection before you part with it. Maybe the iDog will be, like its ancestor the Piggy Cook, worthy of one day being Consigned, Cool, & Collected!