The (Incorrect) History of Boba Fett 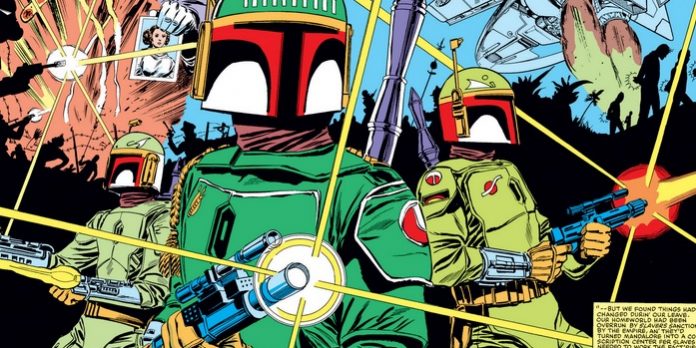 Welcome back to Consigned, Cool, & Collected, where we look more deeply into the background of the stuff sold by Back to the Past! Today, we’re looking at Star Wars #68, a key issue from the original Marvel series that made its way into our January 16th auction session. This is also Part One of a crossover with my other informational column, Hammer Drops, that celebrates both columns going weekly. Without further ado, let’s talk about Boba Fett!

Boy, Does He Look Cool…

Boba Fett made his in-story debut in the animated portion of Star Wars Holiday Special, which aired on November 17, 1978. Thanks to the special airing right about halfway between the first two movies, Boba Fett was the public’s first glimpse of what was coming next for Star Wars. His faceless-armored-gunslinger vibe pretty immediately captured the imaginations of kids and fans alike. He went on to be the very first action figure based on The Empire Strikes Back as part of a legendary mail-away promotion.

…But What’s His Deal?

Despite pretty immediately becoming a fan favorite, there was very little elaboration on Boba Fett in any of his early appearances. All that was known about him by viewers of both appearances was that he is a bounty hunter working for both Darth Vader and Jabba The Hutt to capture Luke Skywalker & Han Solo. Which is also what you’d know if you read the blurb on his action figure. It wasn’t much to go on.

Star Wars #68, published in early 1983 as part of the run-up to Return of the Jedi, was an attempt to flesh him out without completely demystifying him. On the trail of the frozen Han Solo, Princess Leia seeks out the bounty hunter Dengar on the planet Mandalore. There, she finds a resistance movement against Imperial occupation being lead by a man named Fenn Shysa, who happens to share Boba Fett’s fashion sense.

Shysa explains to Leia that Fett was his commander in an elite force that saw action during the Clone Wars. clonemasters in the Clone Wars, and the armor was their uniform. These Mandalorian Supercommandos battled the Clonemasters for the empire, and only three survived. That heavy attrition prompted Fett’s disillusionment and mercenary career. Disapproving of his former comrade’s current activities, Shysa aids Leia in locating Dengar.

“Amazing. Every Word of What You Just Said Was Wrong.”

Of course, anyone who saw Star Wars Episode II: Attack of the Clones knows that that in no way resembles the canonical history of Boba Fett. Even so, this issue was the very first to mention and assign military importance to Mandalorians as a culture. The high notes of Fett’s proposed origin – that the armor is Mandalorian military issue, that the Mandalorians were supercommandos of the Clone Wars era, that the Mandalorians were basically betrayed and left out in the cold by the Empire afterwards – should all sound very familiar to viewers of The Mandalorian on Disney+. The details were “wrong”, but the basics remain key Star Wars canon.

Accordingly, the issue has jumped quite a bit in value in the few years. Back in 2016, it was reliably a $20-60 book depending on condition. That’s a solid value, but today it sells for…well, we’ll get into that in Hammer Drops on Wednesday. But for now, we’ll just enjoy that even hopelessly out-of-continuity comics are worth being Consigned, Cool, & Collected!