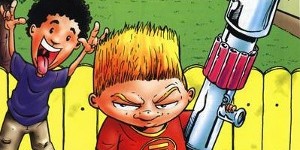 And now for something completely different, a RETRO REVIEW discussing a comic book that is only from 1999! What’s that mean?  Have I ran out of older comic books to talk about?  No, not at all, I simply came across this series of comics while searching for something else and remembered it fondly, so even though it doesn’t date back to long ago, I thought it would be fun to write about it.  And that comic is … image a drum roll here … The Adventured Of Barry Ween, Boy Genius # 1.  It is cover dated March 1999, a mere seventeen (17) years old, and it is published by Image Comics.

Here’s the front cover of that first issue: 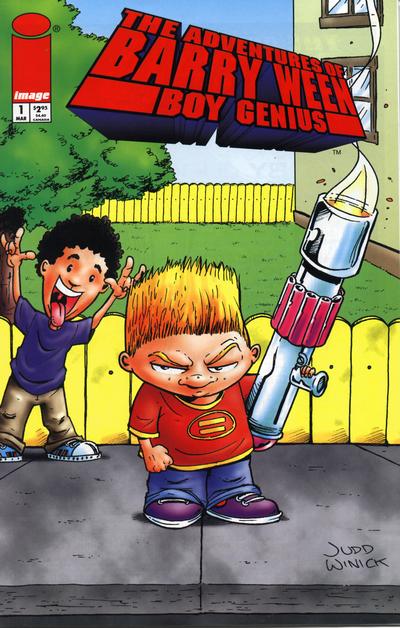 The series was a short three issues, but each one was full of witty writing and barely acceptable artwork by writer, artist, Judd Winick.  The story is entitled; “Time Lord” and no, it has nothing to do with Doctor Who!  In this first issue, the reader gets a one page introduction/origin story for Barry.  The bottom line:  he was born a genius.  The story in this comic takes place ten years later.

Our boy hero, is ten years old and is working on a new invention.  Needles to say it wasn’t suppose to involve inter-dimensional warps, but somehow, by accident, that’s what Barry managed to do.  He opened an inter-demensional warp in his parent’s basement!  To make matters worse, it irregular intervals, there are explosions from the warp.

He distracts his mom from the blasts and calls his best friend, Jeremy Ramirez, to come over and for him to bring Eric Goldstein with him.  Barry sends Eric through the warp, anchored by a rope.  I won’t reveal the funny method Barry uses to convince Eric to cooperate with his plan here.  Buy the comic, you won’t be disappointed.  Oh, did I mention that the inter-dimensional warp looks like a big vagina?  No, well it does!

Barry and Jeremy pull Eric back to safety, but while taking care of him, Barry’s dad comes down to investigate the explosions and gets sucked into the warp.  He manages to return, but he has been”regressed down the evolutionary ladder”, i.e. he’s been transformed into a “caveman”.  Which turns out to be just fine with Barry’s mom.  But again, just buy the comic, really.

Barry orders supplies to be drop shipped to his house and meanwhile a number of different lifeforms come through the warp, some out of time, some from distant planets by their forms.  Barry leaves Jeremy in charge of these people/creatures while he studies the situation and eventually suits up and enters the warp.

He deploys a bomb-like devise and quickly is reeled back into his basement, where he and Jeremy give the “bums-rush” to all the displaced people and creatures, forcing them back into the warp before the device goes off and seals the breach!

One small problem remains.  His dad is still in his regressed state.  Jeremy is concerned about this, but Barry says, things are okay and that he’ll give his mom ‘another week of the good life” before “fixing” his dad.

One thing I should mention, is that this comic is not for younger kids.  Both Barry and Jeremy regularly use inappropriate language, but it really is funny “hearing” such foul language come out of these 10 year old comic book characters.  Winick really writes a very funny story and his art, takes a bit to get use to, but it is perfectly serviceable.

As I mentioned the initial run ran just three issues.  I shared the cover to the first issue above, and here’s is the other two covers in the initial run: 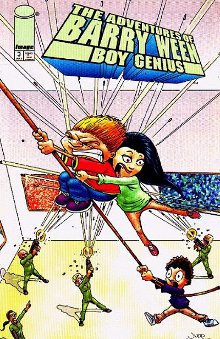 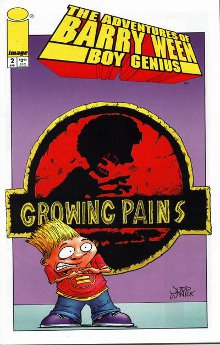 The series proved to be so popular, that Oni Press quickly reprinted these three issues in a trade paperback (TPB) just a few months later, in November of 1999.  That’s really quick, but I understand that the TPB was also success and went into multiple editions/printings.

I really recommend these three comics, or the TPB.  Issue number two (2) dealt with Barry turning his friend, Jeremy into a dinosaur.  The solution even involved cloning!  And in issue number three (3), Barry and Jeremy go on a school field trip to their local Museum of Modern Art.  Barry, may or may not, have made an entire class sick, so that a girl he likes, Sara Tan, and her class, with get to go with his class to the museum.  And while there, art thieves strike.  Now image the movie, Die Hard, and you’ll get an idea where this story goes.

I’m not sure if I’ve done the character of Barry Ween and the humor justice, but here’s a couple of quotes from people you may have heard of; Garth Ennis says; “Barry Ween is Calvin & Hobbes on PCP”, Matt Wagner says; “South Park meets Dexter’s Lab in the smoldering aftermath of The Real World“.  So don’t just take my word for it.

Back issues are cheap on eBay and even the trade is reasonable, as well.  So give it a try if you aren’t already a Barry Ween fan.  You will soon be one!

So that’s it for this RETRO REVIEW, but please check back next week for a new Fabulous Find, same Bat time, same Bat channel.  be seeing you ….