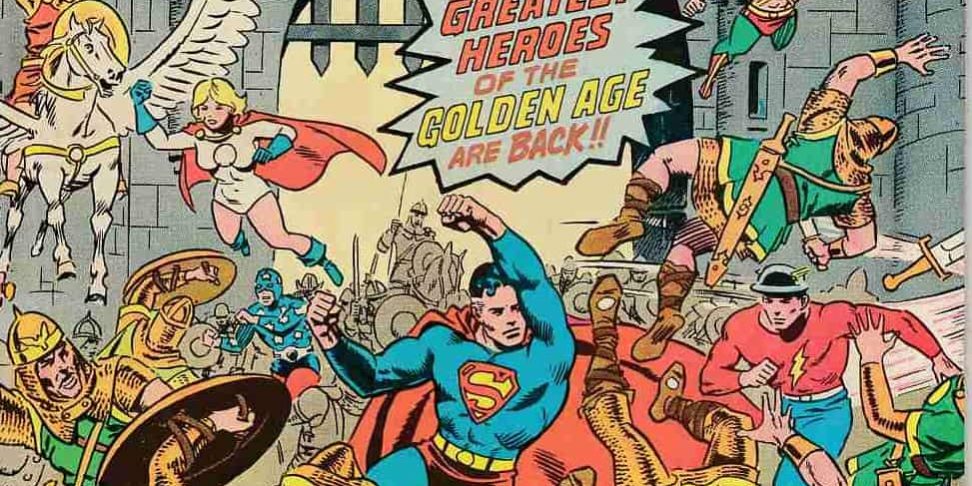 This week I would like to offer DC Comics’s All-Star Comics #s 64 and 65, cover dated February and April 1977, for my retro review(s).  Issue # 64 features a beautiful Wally Wood cover featuring three members of the legendary Justice Society of America, Superman, the Flash and Hawkman, along with two members of the Super Squad, who recently became full members of the JSA, the Star Spangled Kid and Power Girl, plus a special guest appearance by the Shining Knight!  The story is entitled: “Yesterday Begins Today!” and is written by Paul Levitz with art, both pencils and inks, by the afore mentioned Wallace Wood.

The story is a continuation of an on-going storyline where the Justice Society members battle indivdual members of their foes, the Injustice Society!   Issue #64 begins with the Green Lantern and the Flash ushering the Shining Knight into their headquarters, having encountered him the previous issue.  The Shining Knight brings them a plea for assistance, as it appears someone is trying to change history, by altering the past.  Without going into how, Superman, Hawkman, the Flash, the Star Spangled Kid and Power Girl go back in time, along with the Shining Knight, to the time of Camelot!

They are set upon by knights, but quickly defeat them and are brought before King Arthur and Merlin, who explain that the Romans have returned and threaten to overcome their knights with shear numbers.  The members of the Justice Society face off against these Romans, only to find that they are actually robots, not real soldiers of Rome!

Meanwhile, back in the present, Green Lantern is meeting financial problems and Hourman is set upon by the Icicle!  Back to the past, (Got to love how I worked that in, eh?) the JSA determines that only Merlin and King Arthur could have set them up to fight these robots and therefore, return to attack Castle Camelot!  They are rebuffed, and King Arthur is revealed to be their timeless foe, Vandal Savage in disguise!  Thus ends issue # 64. 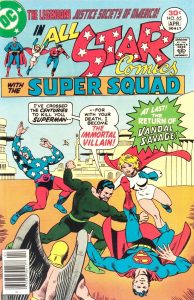 All-Star Comics # 65 picks up immediately from there, with the members of the JSA fighting to escape Savage’s traps, by the same creative team of Levitz and Wood.  Though the art in issue # 65 is not nearly as detailed as in issue # 64, it does have some nice artistic effects by Mr. Wood!  Frankly the cover leaves a lot to be desired this issue, as well.

Each member is given a number of pages to show them “doing their thing” and there is a nice Superman/Vandal Savage punchfest that runs throughout this issue!  How does Savage stand up to Supes, you ask?  Good question!  He’s created an artificial Kryptonite atmosphere, draining Superman of his powers and Savage is using a machine to drain Power Girl’s powers and use them to power himself!  The Star Spangled Kid becomes the hero by creating a suit to protect Superman from the Kryptonite effects and he also rescues Power Girl from Savage’s machine, thus removing Savage’s power source.

Vandal Savage is forced to flee and races to his control booth, only to be intercepted by two shadowy figures, who seize him, and then all three disappear.  Superman says that he doesn’t think it was a planned escape and that it appeared that the two figures dragged Savage into the warp, therefore he doesn’t think that they’ll be seeing him again!

The last two panels of the story show the present once again and the Icicle controlling Hourman, and using him to take down Wildcat, setting up a tense clifhanger ending, leading into issue # 66.  But I’m going to stop here, as the main time travel storyline is wrapped up in these two issues.

The story is fun, and I’ve got a weakness for time travel stories.  The art is great in issue # 64, but just okay in issue # 65, so I’m going to give these two books a rating of three (3) out of five (5) possible Legion Flight Rings!  If the art in the second issue was as solid as in the first issue, I would have given it a four (4), But, as it wasn’t, I can’t go that far!