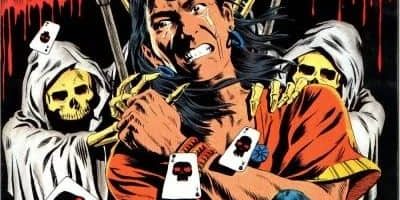 Welcome back!  This week it’s time to delve into the independent boxes again and see what we can pull out.  From Eclipse Comics, it’s Aztec Ace # 7, cover dated October 1984.  It features a beautiful cover by Dan Day and Tom Yeates.  The story is entitled: “Murdicide” and it was written by Doug Moench, with pencil art by the afore mentioned Dan Day, with inks provided by Nestor Redondo.

Aztec Ace was a short lived series, only lasting fifteen (15) issues, published during 1984 and 1985 from, now defunct publisher, Eclipse Comics.  The team of Moench and Day originated the main character, as well as the supporting characters.  I understand the characters returned in the 1988 series Total Eclipse, but, as I do not own any issues of that series, I can’t confirm this fact.

The story focused on the time traveling main character, Aztec Ace, who real name was Caza.  His mission was to save the time stream from unraveling through his various time travel adventures.  He was born in the 23rd Century, but had his base of operations in pre-contact Aztec, Mexico (whatever that means) ((but basically, I think that means that it was in the time before the white man discovered and invaded Mexico)).  His main advisary was Nine-Crocodile, who created time paradoxes in an attempt to save his own timestream at the expense of other realities.  He’s seen in this issue, but really plays no part in this storyline.

This issue begins in 1940 and explains how Ace’s love, Bridget, came to join him, outside of time!  The intricate story kicks off with lyrics from the then, hit song, Time After Time, by Cyndi Lauper and features some lovely artwork showing the Azure Cross-Time Express, think old-fashioned Steam locomotive or even the Hogwart Express from the Harry Potter movies!  Ace spends pages and pages explaining to Bridget that she has to die in 1940 to be able to join him as his companion (think Doctor Who’s various companions here).

The rest of the comic is made up of the current Ace and Bridget viewing the past Ace and Bridget, as they meet and decide to travel time together.  Ace sets off to murder Bridget to empower their future, but fails to “do the dirty deed”, so Bridget decides that she must kill her self to continue as Ace’s companion and lover.  The last half of the book shows how she manages to kill herself and still lives to become Ace’s companion and true love!

For a time travel story, it’s well written and makes sense, within the general time-travel rules, versus paradoxes etc., at least as we (I) know (understand) them.  The art is very nice, but maybe just a little stiff.  Dan Day’s art isn’t quite up to his brother, Gene’s excellence, but very servicable, nerver-the-less.  It looks like he’s maybe drawing upon Humphrey Bogart and Lauren Bacall when he’s drawing Ace and Bridget in the ’40’s, almost a film noir look.

I give this issue a strong rating of three (3) out of five (5) Legion Flight Rings!  A well written comic with nice art.  Not your typical super-hero, but well worth searching this series out and reading!