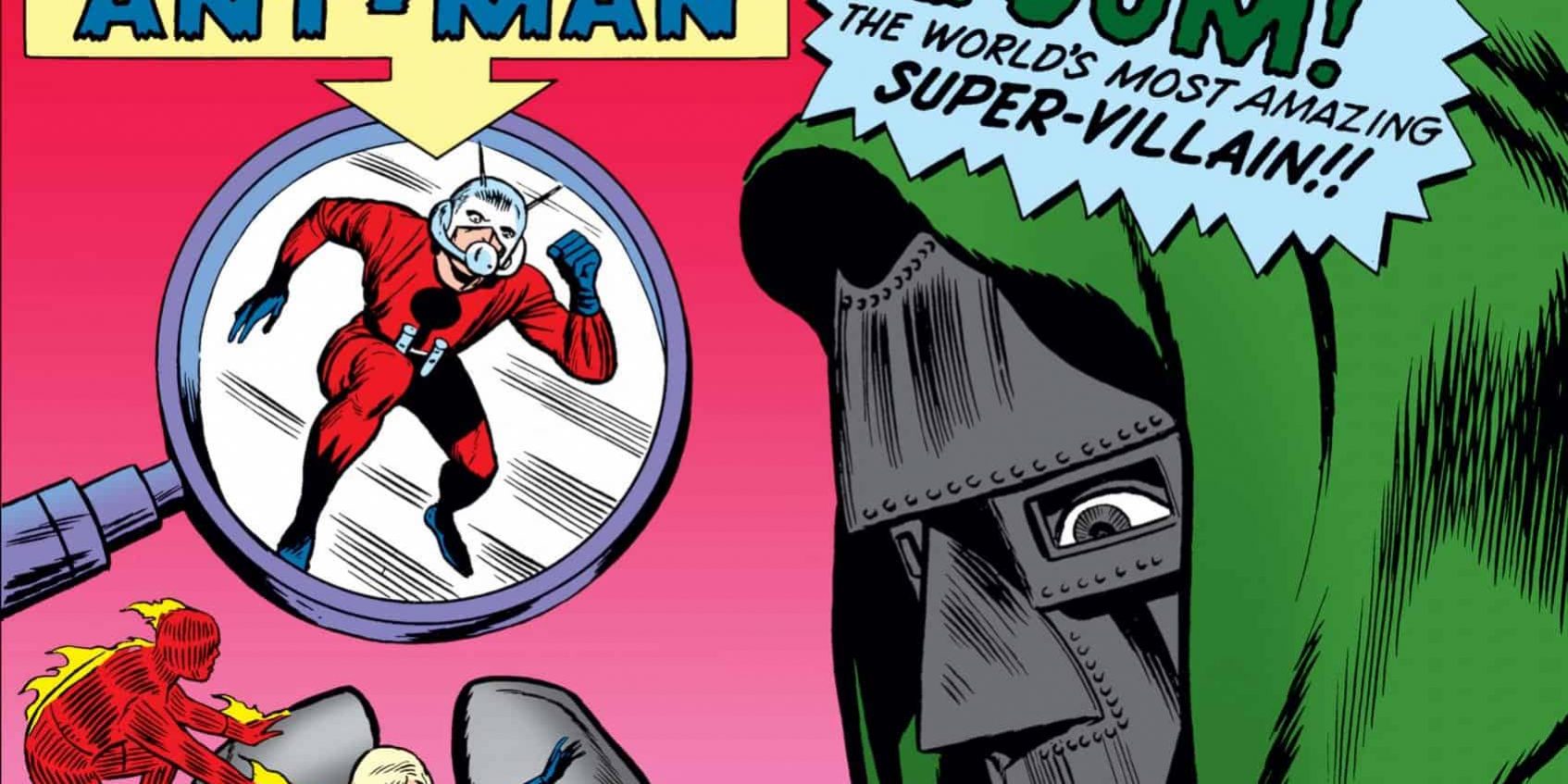 I’m going to go back a little farther into my collection for this retro review.  Way back to Marvel Comics’ Fantastic Four # 16, cover dated July 1963.  This issue is entitled “The Micro-World Of Doctor Doom!” and features a special guest star; the amazing Ant-Man!  It’s written by Stan “the Man” Lee and penciled by Jack “King” Kirby, with inks provided by “Dapper” Dick Ayers and inked by Art “say it ain’t so” Simek!  The cover is drawn by Jack Kirby, as well, showing a shrunkened Fantastic Four in the hand of Doctor Doom, with Ant-Man shown beneath a magnifying glass nearby!

I chose this issue, as even though it featured Doctor Doom’s third appearance, as this is the first issue that I ever encountered “the good” or shouldn’t that be “the bad” Doctor!  It also was one of the first Marvel comic books I ever owned, though I don’t really remember how I got it.  I guess it was purchased for me by my mom or dad.  They use to pick me up comic books to read during the long car rides to Kentucky, to see my grandparents every summer.  I distinctly remember trips to the local drug store to pick out a few comics for the trip on other occasions, but I don’t remember picking out this one.

The first page splash doesn’t actually happen in the story but it’s outstanding never-the-less and it really grabs the reader!  It shows a large Doctor Doom peering into a microscope, with small Fantastic Four figures fleeing the microscope, along with Ant-Man riding on an ant.  The Thing is ripping apart the microscope right out from under Doom!  Obviously a symbolic splash is there ever was one, but a truely great one, as well.

The story begins with the Human Torch returning to the Baxter Building in a hurry, as the others in the group have not answered when the Torch signalled.  He rushes in to discover the three other members shrunk down to tiny size and in danger of being sucked into an air vent.  The Torch seals the vent and before his eyes the others return to full size.  Even Reed doesn’t know why they had shrunk!  The next couple of pages covers each of the Fantastic Four’s stories of other times when they shrunk unexpectantly!  Then a voice mysteriously is heard saying that this is only the beginning!

Reed decides he needs help from Ant-Man, as he is the Marvel expert on all matters regarding shrinking.  An ant overhears and summons Ant-Man before the Thing can reach him on the phone.  Ant-Man (Henry Pym) gives Reed some of his growth/shrinking formula so they can immediate grow if they are shrunken again.  Then there is a break in the story to cover “the little things” that make this the “World’s Greatest Comic Magazine” (Hey, it says so right there on the cover!).  Reed tests a new formula on the Thing which turns him back into Ben Grimm right when he’s lifting a piano.  Johnny roasts hot dogs with his flame for his fellow Glenville High students during a picnic, and Sue is testing various sprays to hide her scent from dogs when she turns invisible!

Reed deduces that Doctor Doom is behind their troubles and they all use Ant-Man’s shrinking formula to trace Doctor Doom, who they last saw shrinking to nothingness in Fantastic Four # 10. Immediately upon using the shrinking juice, they shrink down to a “micro-world” where Doctor Doom has taken over and installed himself as ruler!  Doom captures the four heroes and inprisons them with the rightful rulers of the micro-world, in a prison surrounded by acid.  Unknown to the Fatastic Four, Ant-Man has followed them, but he is captured as well.  Before he can be put into the same prison, the Fantastic Four break out of the prison using each of their powers together as a team!

An invisible Sue frees Ant-Man and together they combat Doom and force him to flee the micro-world by enlarging himself back into their world.  The story ends with the Fantastic Four restoring the rightful rulers back on the throne and vowing to tackle Doctor Doom in their own world, as they enlarge back!

Wow!  Quite a story and a continued one to boot.  Unfortunately it was years and years before I got to read the second part of this story in Fantastic Four # 17, but it didn’t really matter, as the Fantastic Four did actually triumph over Doctor Doom in this issue.  And even though there was more to come the following issue, this story was pretty self-contained and came to a resolution!  Kirby’s art was still a little rough, at this time, but I still give this comic a rating of four (4) Legion Flight Rings out of five (5)!