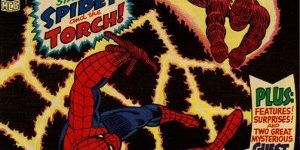 Greetings and salutations, it’s time for a new RETRO REVIEW.  And this week I’ve pulled out the Amazing Spider-Man King-Size Special #4, cover dated November 1967, from Marvel Comics.  The story is entitled; “The Web And The Flame” and it is written by Stan Lee, with the pencils supplied by his brother, Larry Lieber and the inks are credited to Mickey Demeo (who is actually, Mike Esposito, incognito).

Here’s the cover to that comic: 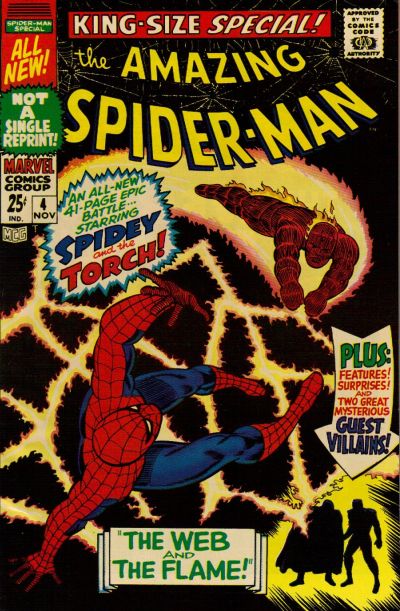 The cover was pencilled by Larry Lieber and inked by Mickey Demeo, i.e. Mike Esposito and as you can see features a great team-up of friends, Peter Parker and Johnny Storm, or if you prefer, Spider-Man and the Human Torch.  As the cover proclaims, the action is spread over a whopping forty-one (41) pages, of all new material.

Things get started with a bang, as Spider-Man witnesses the Torch going wild on the streets of New York.  He jumps in to stop him and we, the readers, get to witness a great four (4) pages of Spidey/Torch action, only to find out that Spider-Man has unintentionally interrupted a movie shoot starring Johnny Storm.  Once again, Peter has egg all over his face.

Peter then hears on the radio that Hollywood wants Spider-Man to star in a film along side the Human Torch.  But all isn’t what it seems to be, as Peter makes his way to Hollywood and the filming starts.  Once on set, the Human Torch attacks Spider-Man and the readers witnesses a second all out Spidey/Torch battle.

But again, not all is as it seems.  Spidey confronts the Torch in hs trailer and Johnny denies engaging Spidey.  It is then that Lee reveals that the true villains that have up to this point stayed in the shadows are none other than Mysterio and The Wizard.  The first being one of Spidey’s foes and the second being a foe of Johnny and the Fantastic Four.

Before the comic is over we get one more Spider-Man/Human Torch donnybrook, before they find out who the villains are and then team-up against Mysterio and the Wizard.  And just because he can, Lee has Peter and Johnny faceoff against a giant mechanical gorilla before they go against the true villains.  It’s great when you have so many pages to fill.

Finally Spider-Man and the Torch battle Mysterio and the Wizard, who they eventually defeat and all ends well, except that there really was no movie.

Since the comic is a King-Size Special it also included a number of special features.  First up was a two page look at the Coffee Bean, the New York hangout of Peter Parker and friends.  Then two pages entitled; “What the Well-Dressed Spider-Man will Wear” which shows off Spider-Man’s costume and his web-shooters.  Next we have four pages showing the reader “Spidey’s Greatest Talents”.  Next is a nifty one page pin-up showing Spider-Man lifting up the Thing, Hercules, Thor, Sub-Mariner and the Hulk!  The punch line to this pin-up is Spidey saying “No matter who you are, there’s always someone stronger!”  So the other Marvel characters obviously represent heroes and anti-heroes who are stronger than Spider-Man, at least that’s my take on it.

Next up is a two page pin-up of eight of Spider-Man’s greatest foes, including the Lizard, the Green Goblin, Electro, Sandman, the Vulture, the Rhino, Kraven the Hunter and Doctor Octopus.  And finally a two page spread showing us the apartment that Peter and Harry Osborn share.

Now that’s what I call a special!  Not only a long fun story teaming up Spider-Man and the Human Torch, but also all those extras and pin-ups and all for only 25 cents!  Why can’t annuals/specials of today be as good?

Anyway, that’s it for this RETRO REVIEW, but I’ll be back again next week with a new Fabulous Find.