Welcome back to Strange Times & Places, where I’ve decided that the whole month of December will be spent looking at Elseworlds, Alternate Timelines, and the Infinite Earths. We’re kicking it off by examining the Earth X introduced in last week’s DCTV Arrowverse crossover, Crisis on Earth X.

It’s a For Want of a Nail Earth, 100%. While the mainstream DCU’s Earth 10 diverges when Superman’s pod lands in Nazi Germany, the CW’s Earth X diverges when the Nazis get the A-Bomb. They take out Allied capitols (and New York City) and invade, achieving global conquest. 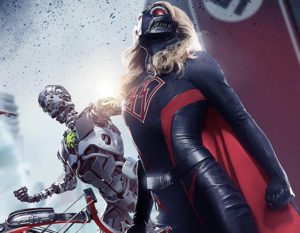 Overgirl, wife of the New Reich’s Fuhrer Oliver Queen, is dying from an overdose of solar radiation. Her husband leads his most elite SS super soldiers (Overgirl, Metallo, Prometheus, and Reverse Flash) in an invasion of Earth 1 to retrieve one of her multiversal doppelgangers for a forced heart transplant – bringing them into conflict with that world’s combined heroes.
As I said in our last installment, this is a pretty bog standard crossover with the alternate universe plot. Doesn’t mean it isn’t good, but it isn’t unique.

Mostly unanswered questions or illogical points – how was 32 year old guy dictator of the entire world? Where was Nazi Flash, since Reverse Flash is from Earth 1? How does the grandchild of Holocaust survivors have an Earth-X counterpart? Why does Metallo even exist on a world where a Kryptonian is his commanding officer? Hopefully, some of them will get answers when the prequel animated series, Freedom Fighters: The Ray, starts airing Friday on CW Seed.

Come Back Next Week For Even More Strange Times & Places!