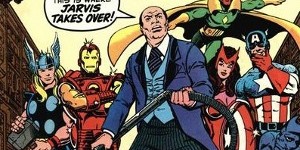 It’s RETRO REVIEW week folks, and this week I’m looking at Avengers # 201 from Marvel Comics.  It is cover dated November 1980, and features an unusual cover, pencilled by George Perez and inked by Terry Austin, featuring Jarvis, the Avengers’ butler.  Take a gander: 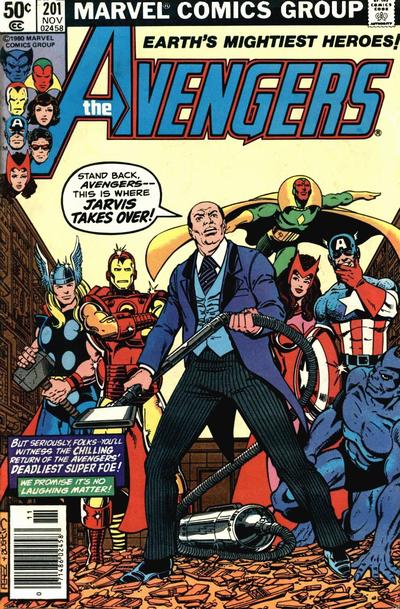 The comic actually has two separate stories within it’s covers.  The first is; “The Evil Reborn” and it is scripted by David Michelinie with the pencils by George Perez and the inks by Dan Green.  It’s an odd fourteen (14) page story that has the Avengers helping in the clean up from their last issues and then each of the various Avengers taking their leave of Avengers mansion.  We do get to see Simon Williams (Wonder Man) on the set of his television show, where he plays a character on a children’s show going by the name, Mister Muscles.  Those two pages are clearly the comedy relief of the issue.  We also get to see Tony Stark/Iron Man get some disturbing news which will lead to the next issue and the story ends with Janet Pym/Wasp getting attacked by a mysterious robot over three pages.

So nothing really happens during this issue, other than to close out the previous storyline and set up the next.  One interesting note, is that this story is based on the short-story written by Jim Shooter, entitled; This Evil Undying”, that was published in the ninth Marvel Novel Series of paperback books by Pocket Books in 1979.  That book featured four short-stories featuring the Avengers, Daredevil, the Hulk and the X-Men.  Shooter only wrote the Avengers story.  In fact that story was rather notorious for years because of it’s attempt to be written for an adult audience, rather than for children, so Shooter deals with some more adult plotlines than he could in a Marvel Comic book.

Here is the cover to that paperback book, which I also have in my collection: 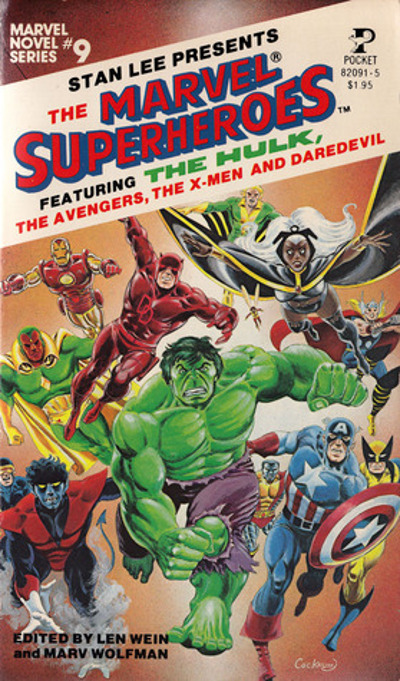 Now for the second story and the one the cover revers to; it’s an Edwin Jarvis solo-story!  Yep, that’s right, it’s all about Jarvis for eight (8) pages.  It is entitled; “Bully” and it is written by David Michelinie and Roger Stern with art by George Perez and Gene Day.  Captain America, Wonder Man and the Beast see Jarvis off, as he leaves to visit his mother for the evening.  Once Jarvis arrives he discovers his mother has been crying over broken eggs.  That’s right, broken eggs, not spilled milk!

It turns out that his mother was on the way home from the store, where she had purchased eggs to make Edwin a Yorkshire pudding.  And on the way back she is robbed by a local tough, who threw her to the ground when he discovered she did not have any money.  It was then the eggs got broken.  Jarvis vows to address the tough and goes in search of him.  He finds him and doesn’t fare to well.  Jarvis questions the shopkeepers and discovers that they are all in fear of this bruiser and will not stand up to him.  Well, Jarvis decides to do something about this and trails the tough and challenges him.  Using fisticuffs that Captain America has taught him, Jarvis is gaining the upper hand until the bruiser pulls out a knife.

But before the bruiser can use the knife on Jarvis, the various shop keepers step in and gang up on the tough and chase him away.  The bruiser runs away saying; maybe he’ll move to New Jersey.  Of course, as a reward, Jarvis asks for a dozen eggs and then invites everyone over for his mother’s Yorkshire pudding!

So as you can see, this was not your typical Avengers comic book issue.  But still a fun issue and one worth owning for that very reason.

Hope you enjoyed this column and come back next week for a new Fantastic Find.  Be seeing you …