1 out of 5 – Would Recommend: Leprechaun in the Hood 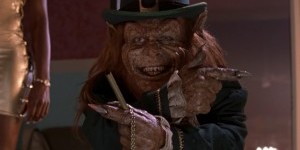 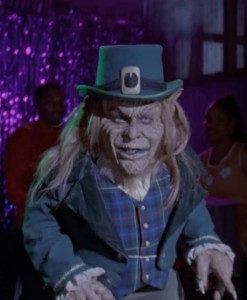 He’s as confused as the audience.

Welcome back to 1 out of 5 – Would Recommend, where we’re celebrating Halloween all month! This week, we’re watching the fifth entry in an…existing horror franchise, 2000’s Leprechaun in the Hood!

A murderous leprechaun is accidentally freed in modern day Compton and kills his way through the ‘hood trying to get back his magical golden flute from a group of hapless wannabe rappers. Our heroes are also chased by a crooked hip-hop producer, who has used the flute’s power to become rich and powerful and wants it back too.

Once more, we care most about the star of the flick: Warwick Davis. I promise you that you’ve seen the guy’s work even if you’ve never seen a Leprechaun movie: Star Wars Episode VI: Return of the Jedi AND Episode I: The Phantom Menace, the Ewok TV movies, Willow, all eight Harry Potter movies, the Hitchhiker’s Guide to the Galaxy movie, a guest shot on Doctor Who, and more fantasy roles than you can shake a stick at. The guy’s nerd royalty, and even in a movie like this you can tell he’s enjoying the work.

In order: Yes these are the heroes, yes this is plot relevant, yes it’s incredibly stupid.

Just one more note on the making of: this movie is the sequel to Leprechaun 4: In Space. How does this franchise top their monster battling aliens and space marines on another planet? By sending him to the cradle of gangsta rap. Kinda makes you wish we’d gotten a proper sequel to Jason X, don’t it?

Look, nothing I say here is going to convince to watch a movie entitled Leprechaun in the Hood if the title alone doesn’t (other than maybe “unexpected masterpiece” or “secretly directed by Wes Craven”). Likewise, if you think watching Leprechaun in the Hood sounds like a good idea, you are – like the filmmakers – far beyond seeing reason. So go forth and enjoy! 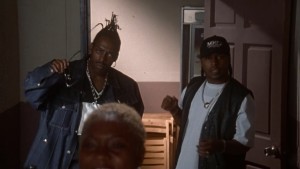 This is the entirety of Coolio’s part in this movie.

NEXT WEEK: Well, the Rocky Horror Picture Show quasi-sequel Shock Treatment was planned…but that movie’s not very Halloween-y, so instead we’ll be watching 2001’s Elvira’s Haunted Hills (which features Rocky Horror creator Richard O’Brien alongside the Mistress of the Dark).

Category: TV & MoviesBy Chris WalkerOctober 20, 2015Leave a comment
Tags: 1 Out of 5 Would RecommendLeprechaun: In the Hood