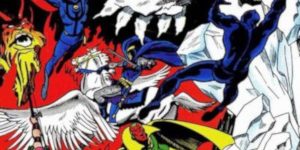 Last week’s RETRO REVIEW looked at Dr. Strange # 178, and the issue left off with the good Doctor and the Black Knight defeating Tiboro, the main villain of that issue, but Dr. Strange had the last word, saying: “We have won but one battle of the great war … the true test is yet to come — the test of Fire and Ice!!”  Then in the final blurb the reader was directed to Avengers # 61 to read the rest of the story.  So this week I am indeed looking at that Avengers comic.

Things start nicely with a great cover drawn by John Buscema and inked by George Klein.  As you can see immediately below in showcases the Black Panther, the Vision and Hawkeye from the Avengers, as well as, Dr. Strange and the Black Knight.

The story is entitled; “Some Say The World Will End In Fire … Some Say in Ice!”  It is written by Roy Thomas and the artists are the same as the cover artists, John Buscema and George Klein.  The really unusual aspect of the story is that it begins with two splash pages, just to encompass the long story title!  The first splash has the Black Knight and Hawkeye facing off against Surtur and the second splash has the Black Panther and the Vision against Ymir!

The  story then picks up within Avengers mansion, where the ethereal visage of Dr.Strange appears to the gathered Avengers, at these the aforementioned three, Hawkeye, the Vision and the Black Panther.  He enlists their help and they follow him in a quin jet to a graveyard.  There Dr. Strange’s ghostly form joins his human body and he leads them into a crypt where they find a comatose Black Knight.

Strange explains what has transpired since the end of his own last issue (Dr. Strange # 178).  They were transporting the captured Tiboro, when he offer to help.  He lures them to this graveyard where he grabs the crystal of conquest and attempts to strike down Dr. Strange.  But the Black Knight leaps between them and takes the mystic bolt intended for Dr. Strange!

Strange quickly overcomes Tiboro again and then seeks the Avengers assistance.  Strange’s skills as a surgeon are then called upon and he uses them to save the life of the Black Knight.

Then the Vision re-enters, telling of fire-belching monstrosities in Antarctica and the Black Panther is contact by his tribe in Wakanda, deep in Africa, where ice is forming on vines and the air is freezing.

Strange sends the Avengers and the, now recovered, Black Knight to the hot and cold spots across the globe and he stays behind to attempt to use the crystal of conquest to defeat the twin menaces.

First up is the Black Panther and the Vision battling Ymir within Wakanda, then a quick look in on Hawkeye and the Black Knight going up against Surtur in Antarctica.  Neither battle is going well and our heroes are barely holding their own against these deadly foes.

Surtur and Ymir seem about to crush the two teams of Avengers, when Dr. Strange using the crystal of conquest transports the demons of fire and ice to the same place at the same instance and they strike each other, rather than the Avengers.  They each strike with a force which men can scarcely image and legends have never described.  The resulting implosion is immeasurable in it’s intensity and both beings disappear.

Hawkeye says they are blown to bits, but Panther says, no, not destroyed, they merely vanished, each of them canceling out the power of the other!  Strange appears and agrees with the Panther and tells them that Surtur and Ymir have returned to the nether world from whence they escaped.

So ends the second of our two part story which ran through two separate comics.  I pretty nice tale and one that utilized some of Marvel’s lesser or little used heroes.  It is well worth tracking both of these issues down at your local comic shop or at a convention.

That’s it for this RETRO REVIEW, but I’ll be back next week with a brand new Fabulous Find.  Til then …