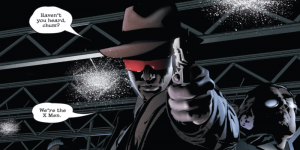 Welcome back to Strange Times & Places, where today we’re looking in on the non-powered world of X-Men Noir #1-4.

Then: Warren Worthington III was patient at the Xavier School for Exceptionally Wayward Youth, an alleged reformatory for juvenile delinquents. When he took a swan dive off the roof, it revealed the school was actually teaching these delinquents – all diagnosed sociopaths – how to better use their criminal skills because Charles Xavier believes sociopaths to be the next evolutionary step in humankind’s development. The school was shut down, Xavier jailed, and his remaining students go into hiding.

Now: Jean Grey, one of Xavier’s former students, washes up dead. Erik Magnus, together with his Brotherhood of corrupt policemen, compete with the vigilante known as The Angel to locate the rest of Xavier’s students and unravel what exactly happened to Jean – the latter to get justice for her, the former to gain control of a talented team of criminals-for-hire.