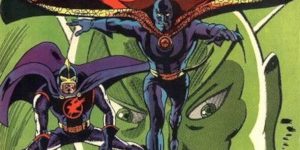 This is the second issue which features the full mask wearing Doctor.  As I mentioned five years ago, a lot of people hated this attempt to make Doctor Strange more of a super-hero, at least in the costume department.  But I, for one, loved it!

This issue features a very cool cover drawn by Gene Colan and inked by Tom Palmer, take a look: 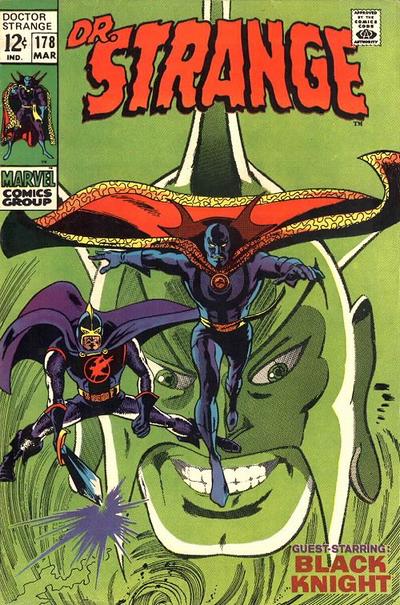 The story, written by Roy Thomas is entitled; “With One Beside Him”.  Like the cover, the interior artwork was done by Gene Colan and Tom Palmer.

The story picks up shortly after the previous issue.  Strange has journeyed to the Ancient One’s hidden retreat in Tibet and is consulting with his mentor.  He is looking to learn more about the Sons of Satannish, who he had faced off against in issue # 177.  Thomas gives us a three page flashback to bring the readers up to date.

The Ancient One warns Strange of the legendary monsters/demons Surtur, the fire-demon and Ymir, the last frost-giant that last issue’s villain had used his last breath to summon.

Strange sends his astral body to England in search of Victoria Bentley, a former student, to enlist her help, as Clea is weaken by the previous issues travails.  Strange encounters, Dane Whitman, the Black Knight and Dane readily agrees to help Strange.

The Black Knight summons his winged horse, Aragon and Dr. Strange whisks them to another dimension where they have to face Tiboro, a foe of Dr. Strange that had originally appeared in Strange Tales # 129.

The last nine pages of the story show the battle between Dr. Strange, The Black Knight and tyrannical Tiboro!  Eventually the Black Knight’s mystic Black Blade separates Tiboro from his magical wand and he is defeated.

The comic ends with the Black Knight asking Strange why he is so silent and grim after their victory.  To which Dr. Strange replies; “We have won but one battle of a great war … (but) the true test is yet to come – the test of … Fire and Ice!”

But that battle will have to wait until next week, when I offer up another RETRO REVIEW for your reading pleasure.  And that test of fire and ice won’t take place in Dr. Strange # 179, but in Avengers # 61!

So make sure you return next week for that review and I’ll run a new Fabulous Find right here in two weeks.  Til then …