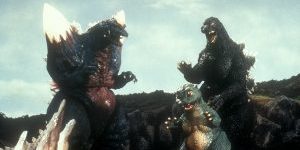 Welcome to Tokusatsu Gesundheit, where this week we’re jumping back into our trip through the Heisei-era Godzilla series (despite not quite having finished before the new movie came out) with Godzilla Vs. Spacegodzilla!

One year after the defeat of Super Mechagodzilla, the United Nations has two competing projects for Godzilla control in the works: Project M, which features two giant vehicles (the tunneling tank Land Moguera and high-flying Star Falcon) that combine into the robotic defender M.O.G.E.U.R.A., and Project T, a mission to implant Godzilla with a telepathic amplifier that will allow a human psychic to influence his behavior. Both projects will need to put into action when Spacegodzilla, a fusion of crystalline alien life and Godzilla DNA, attacks Earth!

This flick was initially meant to feature a new version of King Ghidorah (renamed “Emperor Ghidorah”) that was closer to his Showa-era incarnation (I.E, a space alien and a literal ruler). However, Toho was also working on a Tokusatsu monster flick entitled Orochi, the Eight-Headed Dragon that starred Ghidorah’s mythological inspiration. The monster was then changed into a monster first named AstroGodzilla (a winged, ice-powered alien Godzilla) before evolving into its current form.

Review
While this flick features my second favorite Heisei-original monster (after Biollante), it’s not actually one of the better entries in the series. The competition between Projects M & T, plus the personal motives on the part of Project T’s military commander, make the movie feel a bit bloated and Spacegodzilla doesn’t really have much of a plan or a goal beyond messing with Godzilla & his son. He hasn’t made a reappearance, since Godzilla is like Marvel comics in being stuck on its 60s era villains, and that’s a darn shame – King Ghidorah, Gigan, and Spacegodzilla would make for a tough trio of space monsters.