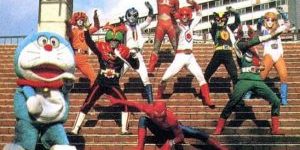 Welcome back to Tokusatsu Gesundheit, where this week we are celebrating today’s release of Spider-Man: Far From Home by watching the first Spider-Man movie ever intended for theaters!

A mysterious international spy with ties to the UN confronts Spider-Man in a hotel room to recruit him for a mission against some super villains. That sounds familiar if you watch movie trailers, but in this case the secret agent is Juzo Mamiya, the agency is Interpol Intelligence, the bad guys work for the Iron Cross Army, and Spider-Man is Takuya Yamashiro!

BRIEF BACKGROUND
This flick was produced for the Toei Manga Matsuri festival (much like the previously covered Metalder movie). As such, it is a glorified episode of the TV show. Agent Mamiya actually took part in a short arc on the TV series the week after the festival.

And unlike the Spider-Man TV movies that were released into overseas theaters around the same time as this one, it was 100% intended to be screened in a theater – meaning it is the 1st official theatrical Spider-Man movie.