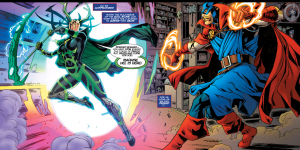 Like all the stories from Marvel’s Warp World, it’s an Amalgam. Unlike their 90s-era inspirations, these tales take place in a halved-by-merger version of the Marvel Universe introduced (and saved from rightful destruction when the merger was undone) in the pages of last year’s Infinity Wars. Warp World now exists inside the Soul Stone, preserving its merged universe in full.

Soldier Supreme, AKA the magically enhanced 4-F volunteer Stephen Rogers, is attacked in his Sanctum Sanctorum by Madame Hel! Perplexed by this development, as he was introduced to her as the girlfriend of his ally Iron Hammer (AKA Stark Odinson), Rogers quickly figures out that heroes all over Warp World are under attack from other hero’s foes…all except Iron Hammer. It appears a founding Defender may be behind these Acts of War, prompting a conflict between the two heroes!
Bonus Back-Up: Soldier Supreme battles Baroness Umar!