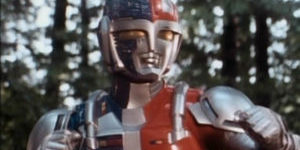 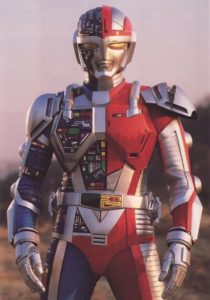 Welcome to Tokusatsu Gesundheit, where today we’re turning our eyes to the big screen version of the sixth entry into Toei’s Metal Heroes franchise, Choujinki Metalder: The Movie!

Backstory: Metalder is a Japanese “supermandroid” created at the end of World War II, hidden away in suspended animation by his peace loving creator. He’s been awoken in the present (1985) to battle the evil cyborg alchemist God Neros and his Neros Empire, an army of monsters and cyborgs intent on returning Japan to its conquering glory!
Flick: God Neros has fallen ill and has charged his four Victorious Saints with killing Metalder. The one whose army succeeds in this task will be named the heir to the throne.

Choujinki Metalder was, as mentioned, the sixth entry in Toei’s Metal Heroes franchise. It went for a darker, more mature plot (as evidenced by the whole “WWII superweapon versus Neo Imperial Japan” plot) and ended up cancelled after 39 episodes and one movie, marking it as the shortest entry in the franchise. 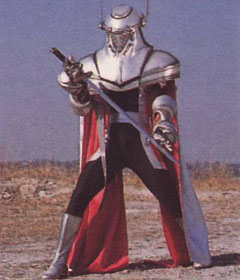 This movie, only twenty or so minutes long, screened as part of a quadruple feature with Dragon Ball: Sleeping Princess in Devil’s Castle, Saint Seiya: The Movie and Hikari Sentai Maskman: The Movie as part of the Toei Manga Matsuri film festival, an annual theatrical showcase for their TV offerings during school holidays.

This “movie” is just OK. It is mostly extended action sequences combined with exposition, befitting a short intended to get kids to watch the series on a weekly basis: “this is what our plot is, here’s stuff blowing up, here’s our hero punching evil samurai.” 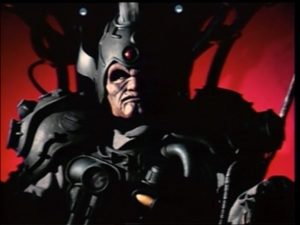 God Neros, showing his face in this review where does in the movie – at the very end.

Come Back Next Week For a New Installment of 1 out of 5 – Would Recommned!