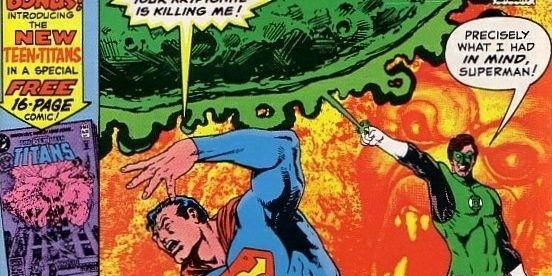 The cover shows Superman being menaced by Green Lantern, who is using Green Kryptonite to kill Superman, nicely drawn by regular Marvel artist Jim Starlin.  The cover is cropped, so the artwork really isn’t showcased like it should have been, at least in my opinion!

The story is entitled; “Between Friend and Foe!” and is written by Marv Wolfman, pencilled by the aforementioned Jim Starlin and inked by Steve Mitchell.  The story begins with Superman turming over the JLA’s satellite monitor duties to Green Lantern.  Green Lantern comments that he has brought along a couple of books, as well as, a video tape of the Dodger game from the night before.  Superman mentions that all he does is “watch the monitor screens and hopes Green Lantern has a good time!”

Before Superman is even off the screens, Green Lantern is contacted by a fellow Green Lantern, who is in need of assistance.  It turns out that it is not a Green Lantern at all, but an evil being who has slain Hal’s fellow Green Lantern corp member and has taken over his shape and form.  It’s not real clear why the being now needs to take ove Hal Jordan, as well, but for the sake of the story he does and actually succeeds!  Whereby he assumes Hal’s form and takes his ring.  Hal avoids death by leaving his body and going into the astral plane, not unlike Marvel Comic’s Doctor Strange, who Starlin had a passing knowledge of, as did Marv Wolfman, as well.

But only so that the evil being can summon Superman and try to do the same with him, thus increasing his power a thousand fold.  Superman is teleported to the being’s location in another dimension, now in Green Lantern’s form, but before the being can strike, Green Lantern re-enters his body and is able to warn Superman.

A slugfest ensues with Superman battling the being now in control of Hal’s ring and in Green Lantern’s shape.  The being eventually has Superman on the ropes the the foreshadowed Green Kryptonite (from the cover) and it’s the powerless and ringless Hal Jordan that stuns the evil N’Gon and allows Superman to truimph!  Superman atually uses his cape to defeat the N’Gon, by wrapping it around his arm so that the yellow S emblem can be used to deflect Green Lantern’s ring constructs.  A very novel twist, with Superman using his head, just as much as his muscles!

A pretty good comic story with rather nice art, though Steve Mitchell does soften Jim Starlin’s art to make it a little more DC like, but I would still give this comic a solid three (3) out of five (5) Legion Flight Rings!