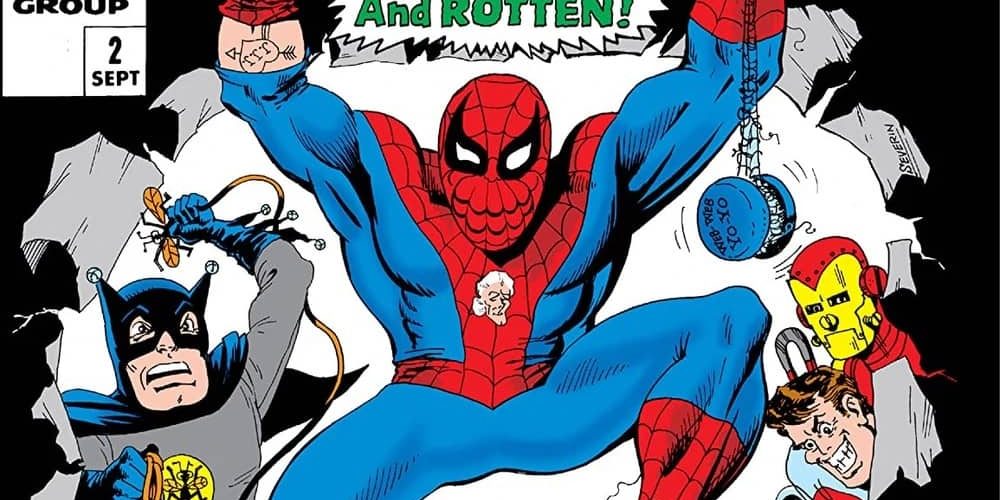 Greetings fellow Back to the Past fans.  I’m back again, to bring to your attention a comic from the Silver Age (this time)!  The comic in question, Not Brand Echh # 2, published by Marvel Comics and cover dated September, 1967.  Yes that’s right, it would have been on sale during the summer of love, 1967!  And with this comic, Marvel Comics, or as within, Not Brand Echh, Marble Comics, shows a little love to it’s competitors, as the Marble heroes go up against rival companies heroes.

Straight from the pages of Defective Comics come Gnatman and Rotten!  They appear in the first of three stories featuring three separate company crossover parodies.   The first, is an eight page story entitled; “Peter Pooper vs. Gnatman and Rotten”, written by Smilin’ Stan Lee. himself, and ablely drawn by Merry Marie Severin!  It even features a one panel cameo by an unidentified Jimmy Olson, with other camoes by, The Might Sore, Stuperman, as well as, Mable villains, the Lizard and Doc Ock, but the main villain is none other than J. Jawbone Junkton, who hires Gnatman and Rotten to do away with Spidey-Man!  Hilarity ensues and ultimately Gnatman succeeds in ridding the city of Spidey-Man, only to become worse that Spidey in frolicking and gamboling around J. Jawbone’s city!  There is a great scene of Gnatman and Rotten scaling the side of a building with J. Jawbone leaning out a window, just like on the sixties tevelvision show!

The second story is entitled; Magnut, Robot Biter and pits him against Marble’s Bony Stark, the Ironed Man!  The Transistored Tin-Can builds a time machine and is flung into Magnut’s future, where of course Magnut, Robor Biter mistakes the Ironed Man for another robot!  And again, of course, in the Mighty Marble tradition, the two heroes battle it out for the rest of this seven opage story, written by Roy Thomas and pencilled by Don Heck.

And the third and final seven page story stars Knock Furious, Agent of S.H.E.E.S.H. against The Blunder Agents!  This tale is presented by writer Gary Friedrich and again drawn by mirthful Marie Severin!  She does an excellent job drawing Knock Furious in the style of Jack “King” Kirby and Dynaschmoe in the style of Wally Wood!  In fact Marie actually draws a costumed King Kirby into a madcap panel where the S.H.E.E.S.H. Heli-carrier is being attacked by just about everyone under the sun!  I loved the six panel half page of the S.H.E.E.S.H. agents at a ice cream fountain counter and using the stools to try to enter their secret headquarters!  This third and final story even ends with a cameo by those television secret agents from A.U.N.T.I.E., So-Low and Eel.

The last page of the comic is given over to a full page next issue blurb, where Marvel touts the coming of origin stories for The Mighty Sore, Charlie America and The Inedible Bulk!  WOw you just gotta love that, eh?

Anyway, I being a dyed in the wool Marvel guy, I loved it and bought it, as well.  I give this humorous Marvel comic a rating of three (3) out of five (5) Legion Flight Rings, because it’s a lot of fun and even features the “other guys” heroes!  Just a fun comic to read and own!