The Beatles to Become Zombies? 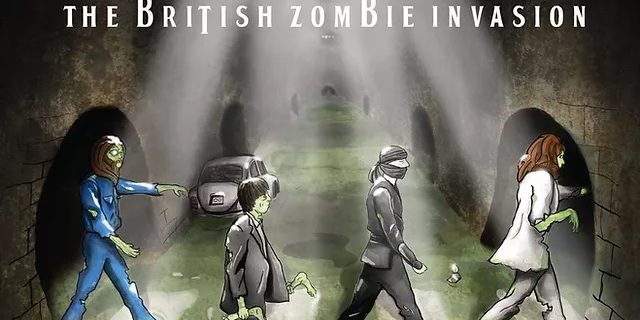 Zombies have taken over comics, the mall, movies, and recently classic books by Jane Austin and Charles Dickens, and now they are coming for The Beatles!  This takes place in an upcoming book, Paul Is Undead: The British Zombie Invasion, by author Alan Goldsher.  Pocket books has announced it’s purchase of the book, which asks; “What if John Lennon became a zombie before forming the Beatles?”

The story begins on October 1940, in Liverpool, England.  An African nzambi hides in the town’s newly-built sewer system, only to reemerge a century later at the Liverpool Maternity Hospital, in the room of Julia Lennon.  The hungrey nzambi takes a chomp from Julia’s newborn, and John Lennon becomes one of the undead, a zombie with otherworldly pwers!

In 1957, John, now an up and coming singer and guitarist, meets Paul McCartney, a fellow Liverpool lad with musical dreams of his own.  Sensing a kindred spirit, John bites off Paul’s ear and sucks out his mate’s gray matter, after which he spits a healthly amount of his own brain matter into Paul’s carotid artery, and thus is born the greatest songwriting team in rock history!

John and Paul zombify guitarist George Harrison, then welcome “seventh level Ninja Lord Ringo Starr into the fold!”  The lovable moptops murder then reanimate thousands of fans at the Cavern Club.  They invade the United States, mind-melding millions during an appearance on the Ed Sullivan Show.  They then embark in an epic battle with rival band and notorious zombie hunters, the Rolling Stones!

The Beatles’ lyrics contain sublimnal messages, such as, “Please  please me by biting your young … Dear sir or madam, won’t you eat your neighbor … All you need is eternal life…”  And before you know it, zombies are “fookin'” everywhere!

Come 1968, the Beatles world begins to crumble.  Experiments with illegal drugs melt the boys brains.  A band called The Zombies, whose members are not actually zombies, seeks revenge on the Fab Four!  Can The Beatles hold out and conquer the world?  Don’t count on it, as the band breaks up and they individually “make a bunch of crappy solo albums” and fade into oblivion.

But in 2010, with John, Paul, George and Ringo all impoverished and bored silly hear whispers of a reunion.  Sure George’s fingers keep falling off, but that won’t stop The Beatles from following their dreams of death and destruction once more!

And that’s not the end of The Beatles zombies, oh no!  They are set to be transformed into zombies for a new movie, based on the above book!  The movie company Double Feature, whose bosses produced hits, such as, Pulp Fiction and Erin Brockovich, have purchased the rights to Goldsher’s book.  They will be seeking financing and hope to begin casting soon!