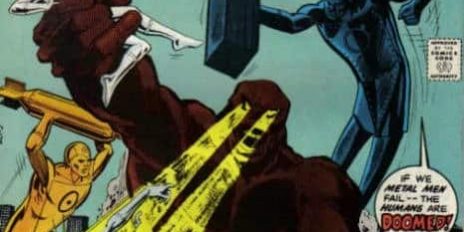 The comic was written by Steve Gerber and pencilled, inked and lettered by Walt Simonson, after completing his stellar work on Manhunter!  His first regular comic book series.  Hopefully, you all know and own those stories, either in the original Detective Comics, or in a reprint collection, as there have been a couple over the years!  If you don’t, I’ll be happy to write about them in another Retro Review.  I highly recommend them!

But to borrow a phrase, I digress, spring of 1976 is upon us and I pick up this new Metal Men series, continuing the old numbering and I’m pleasantly surprised.  Six years previously, the Metal Men were hunted and had gained “human identities” thanks to a mystery plastic of some kind.  Doc Magnus had been kidnapped and his mind warped towards destruction!  The Metal Men were forced to face their creator and their battle ended in a draw in issue # 41.  Things were to have been resolved in the next issue, # 42.

But Metal Men # 42 didn’t didn’t follow immediately after issue # 41.  In fact, as I mentioned earlier, it took three years before issue # 42 came out, and then it was a reprint of an earlier issue.  Issues 43 and 44 also came out, featuring more reprints, and no resolution to the storyline begun long ago.  Then the comic once again disappeared from the stands.

A further three years pass before Metal Men # 45 appears on the comic racks.  There have been some behind the scene changes.  Sometime between issue # 41 and issue # 45, the Metal Men have freed Doc Magnus from the clutches of the evil dictator, who had taken over his mind.  He now is in the hands of the U. S. Government, who have taken charge of caring and rehabilitating him.  The Metal Men have discarded their pseudo-human identities and are just trying to deal with being the only thinking robots in the world.

Not a bad comic at all, as it wraps up a large number of loose ends from the original series and restores the status quo within the Metal Men world, as well as, promises more to come.  A well written re-introduction to the Metal Men and excellent artwork.  I know I was hooked once again, therefore I give this comic four (4) flight rings out of five (5).