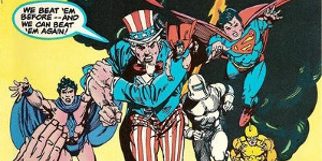 Time for another RETRO REVIEW for your reading pleasure!  I believe it’s time for a DC Comics issue, so I have pulled out my copy of DC Comics Presents # 62, cover dated October 1983.  Why did I pull this particular issue out, you ask?  Good question, as it is far from a favorite issue, but next Tuesday is the Fourth of July and this issue’s story is entitled; “Born On The Fourth Of July!”.  So what better comic to treat to a RETRO REVIEW!

The cover is both pencilled and inked by the great Gil Kane and features the heroes of the comic running and flying directly towards the reader, always great image for a cover, in my opinion, at least.  Take a look: 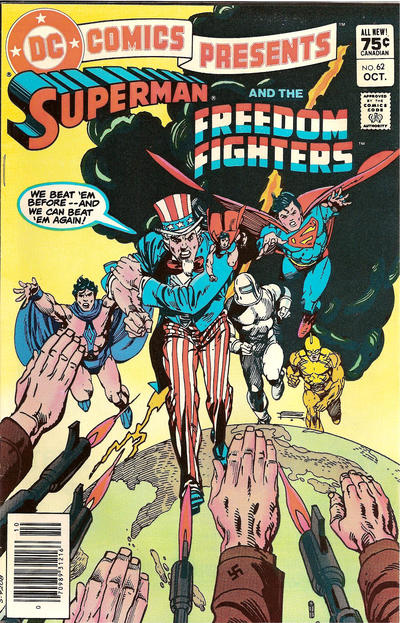 The story, as I said before is entitled; “Born On The Fourth Of July!” and it is written by Bob Rozakis and Dan Mishkin.  The interior artwork is by Irv Novick (pencils) and Dave Hunt (inks).

Breaking the fourth wall, the comic begins with a young boy on Earth-Prime, who has snuck away from his class/school’s tour of the American History Museum, to read the latest issue of DC Comics Presents!

Meanwhile, Uncle Sam, is attempting to get Superman to help with recovering the Declaration of Independence and the Constitution, which have both been stolen on Earth-One.  It was this very theft of the Declaration of Independence and Constitution that led to worldwide tyranny on the Freedom Fighters original world, Earth-X.  Uncle Sam fears that the same fate may now be in store for Earth-One.

Uncle Sam fails to secure Superman’s assistance, as Supes must prevent the possible loss of several billion gallons of oil due to a natural disaster.  The Government documents are in the possession of a Neo-Nazi group who are plotting the overthrow of the American Government.

There is something about the sudden death of America’s wheat crops and Superman takes a sample and leaves for his Fortress of Solitude to assay the dead wheat.  His tests are interrupted by a call from the White House, and Superman flies back to the USA, where the Freedom Fighters are trying to stop a street riot.  Superman arrives and using his super-breath, he draws the oxygen from out of the air, causing the rioters to pass out.

Meanwhile, Superman has been chasing Russian vessels at sea that contain nuclear missiles.  He saves the ships from destruction and turns them around, then rushes to the Freedom Fighters battle site.  His timely arrival save Uncle Sam from being killed and they, Uncle Sam and Superman return the historical documents to the President, himself.

As things wrap up, Uncle Sam makes a stirring speech reaffirming the United States’ liberty and strength of Nation appropriate for the Fourth of July and the boy the reader saw at the beginning of the comic, finishes reading his comic book and hurries to rejoin his class.  Then we see Uncle Sam pick up the very same discarded comic book and he begins to read it himself!

Happy Fourth of July everyone and remember the freedoms we sometimes take for granted on this upcoming Holiday!