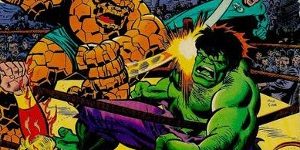 Greetings and salutations comic book fans.  This week I found myself searching in the Marvel Comics section of my vast comics vault.  And I’ve pulled out a gem, at least I think so!  So what did I find?  I’m glad you asked.  I dug out my copy of Giant-Size Super-Stars # 1, cover dated May 1974.  If you look at the cover closely, you’ll also see that it says; featuring: the Fantastic Four!

The cover is pencilled by Rich Buckler (best known as the creator of Deathlok, the cyborg, who will appear just a short time later that same year) and inked by “Joltin” Joe Sinnott.  As you can also see by the cover below, the comic is billed as the wildest Thing vs. Hulk battle of all!

Take a peek at the cover: 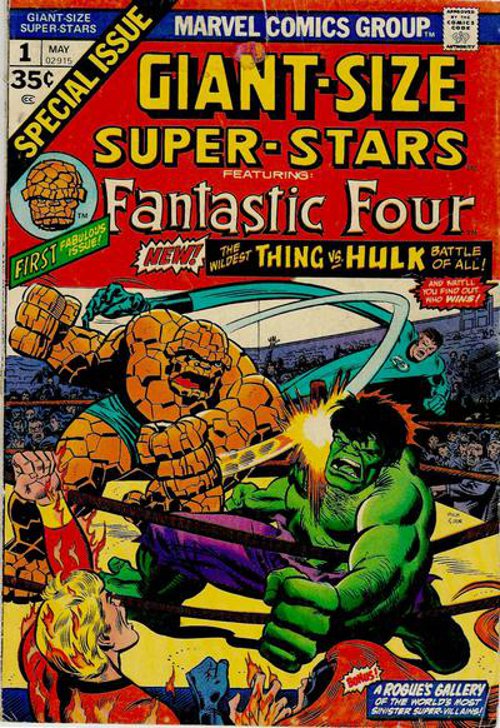 The twenty-four page story is entitled; “The Mind Of The Monster!” and it is written by Gerry Conway, with the interior art by the cover duo, Buckler and Sinnott.

This is the first of a series of Giant-Size books put out by Marvel Comics in 1974 and 1975.  The most famous, and the most valuable is Giant-Size X-Men # 1, which features the introduction of the new team of X-Man, including Wolverine.  The line was conceived by Stan Lee and Roy Thomas and was originally planned as a rotating feature to start with this first issue, featuring the Fantastic Four, with the second issue to feature Spider-Man and the third to feature Conan the Barbarian.  The second comic did come out but the title of that book was Giant-Size Super-Heroes # 1, featuring Spider-Man.   When the third issue came out it was simply titled; Giant-Size Conan # 1.  From that point the series were simple entitled;  Giant-Size, then the name of the character(s).

The book opens with a wonderful splash page drawn by Buckler, but instead of featuring the Fantastic Four, it shows the Hulk leaping through New York City.  Take a look: 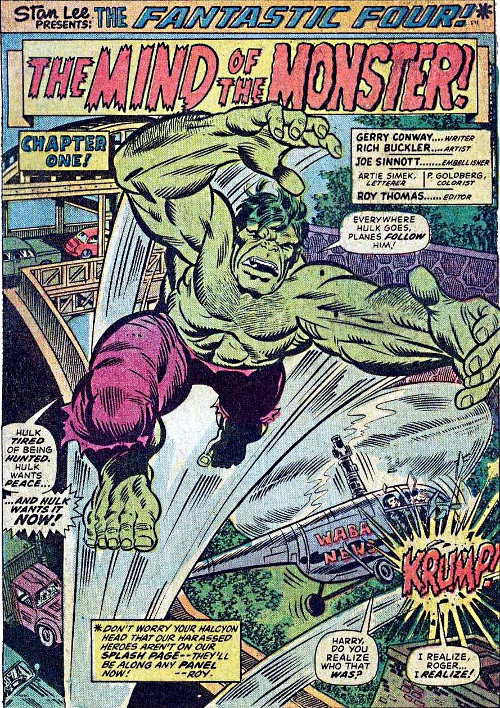 I’m not sure why, but this image has long stuck in my memory banks.  I love Buckler’s version of the Hulk that he drew in this book.  It’s a bit of a throw back to Jack Kirby’s original design.  I love that he drew in the hair on the Hulk’s chest and arms.  With a splash page like that, you knew it was gonna be a great read.

The gist of the story is that Bruce Banner has come to New York (as the Hulk obviously) to meet with Reed Richards to see if Reed can cure him of transforming into the Hulk, due to the gamma radiation contained in his body.  Bruce finds only the Thing at home in the Baxter Building.  The Thing tells Bruce of Reed’s latest attempt at curing him of his own cosmic ray radiation problem, but Bruce thinks he can adapt the invention to cure them both.

Needless to say, this interests the Thing, who would love to be able to be plain Ben Grimm once again.  Banner’s plan involves using both of their curses in an attempt to cure them.  He proposes to blast the Thing with Gamma radiation and then blast himself with the cosmic ray radiation and that the radiations should cancel each other out.  Sounds like a plan, eh?

Then ensues a longer than usual battle between the two behemoths!  Toss in Thunda, as well as, the Human Torch,  neither of whom understands what has happened and chaos ensues!  The Thing (Hulk) and Hulk (Thing) battle across New York and even come up into Madison Square Gardens.  Eventually, Reed Richards figures out what is going on and manages to switch their minds back to where they belong, thus saving the day.

Maybe this doesn’t rate as one of the all time best stories in the history of the Fantastic Four, but it is a pretty cool one, never the less.  And one I certainly recommend.  These Giant-Size comics from 1974 and 1975 are still affordable, with maybe the exception, being that Giant-Size X-Men # 1, but luckily I bought my copy off the stands back in the day, for 35 cents.  Sorry to rub it in, if you don’t have that comic in your collection.

Thanks for continuing to read, and hopefully enjoying my posts, and please return next week for another Fabulous Find, and again in two weeks for another new RETRO REVIEW.  And unless I got ate by a bear while in Alaska, over the last couple of weeks, I should be home safe and sound, and able to keep up with my deadlines.

Til next time, take care folks and I’ll be seeing you …