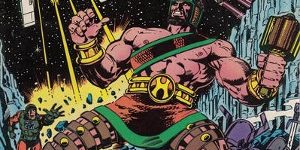 Hey, hey, hey, it’s time for another RETRO REVIEW and this week I’ve dug through the Marvel Comics section of the comics vault and unearthed Hercules, Prince of Power # 1, cover dated September 1982.  I should mentioned that the subtitle, Prince of Power, is only listed on the cover and is not listed as part of the title in the indicia.  Just thought I should clarify that, in case you were wondering.

This is the first issue of the first Hercules mini-series that ran four (4) issues from Marvel, cover dated September through December 1982.  It features a nice cover, both pencilled and inked by Bob Layton.  Take a look: 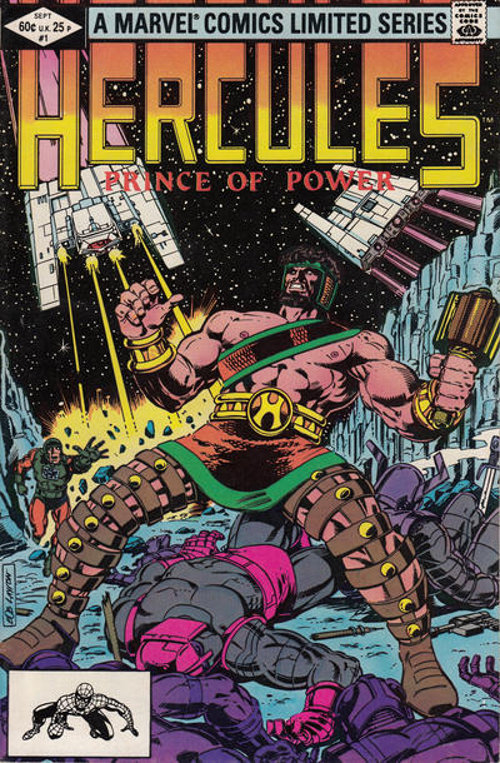 The story in this first issue is entitled; “What Fools These Immortals Be!” and it is written, pencilled and inked by Bob Layton.  The final three issues in the mini-series would only be laid out by Layton and would be finished by other artists.

The story begins, in possibly an alternate universe, during the twenty-fourth (24th) century, where Hercules is finally returning to Olympus after many thousands of years.  The splash page is gorgeously drawn by Layton showing Hercules scaling up the mountain side to reach Olympus.  Unfortunately, he returns on a day set aside for quiet and solitude to honor Zeus.  Well, quiet and solitude don’t mix with Hercules, so of course, Hercules disturbs Zeus’s meditations.  Zeus goes in search of the racket and finds his son having a good ‘ol time with four (4) serving girls.

Zeus vows to banish Hercules once again, even though he has just arrived back in Olympus.  The next morning Zeus officially levels his sentence, swearing that Hercules will stay banished until he learns the lesson of true humility. Hmmmn, didn’t we see this same storyline over in Thor, with Thor being banished by Odin, until he too learned humility?  Yes, I think we did, it was Thor’s origin story!

The twist here, is that Hercules is not banished to Earth, where is is a God among men, but he is banished to Outer Space, where he may be a “puny creature”.  Zeus’ words, not mine!  Hercules expects to be banished by on of Zeus’ thunderbolts, but instead he is given Apollo’s sun-chariot, pulled by two space fairing steeds.

Hercules proceeds to fly off into space where he eventually encounters a fleet of Colonizers from the Planer Rigel.  Long time Thor fans are very aware of the Colonizers of Rigel, as well.  Hercules lands in their lead ship and he is given rest and refreshments.  While there, Hercules picks a fight with another being, and though large and strong, the alien is simply childlike.  Needless to say this doesn’t go over well with the Rigelians.

At this moment, another spacecraft crash lands on the ship and Hercules saves the passengers, as well as, the Rigelian ship, as well, by tossing the deadly ship’s reactor into space before it explodes.  The Rigelians set up a recorder, a humanoid robot, to go along with Hercules so that they may capture his exploits.

The issue ends with another alien being spilling Hercules drink and Hercules immediately goes to gift him the gift of combat, but suddenly decides to stay his hand.  Hmmmn, is Hercules finally on the way toward learning that lesson in humility?  Well, we’d have to buy the other three issues of the mini-series to find out!

Writer and artist, Layton, has been quoted that he was very interested in writing a finite story line at the time, as well as, exploring the humorous side of this character.  I think he succeeded.

In fact, obviously Marvel thought Layton succeeded, as well, because there was a second four (4) issue mini series that appeared about a year later, volume two was cover dated March through June 1984.

One more thing I wanted to mention, was that this mini-series appeared at about the same time as the first Frank Miller Wolverine mini-series from Marvel, so I’m not sure which officially began the mini-series format that took hold back in the eighties.  Both series were cover dated, September through December 1982, and I do not know which appeared on the comic racks first.

Anyone know?  If so let me know, thanks!  And that wraps up this week’s RETRO REVIEW, but please return next week for a new Fabulous Find.  Hang loose, true believers!