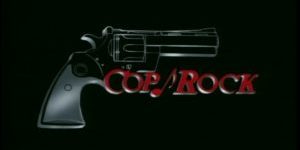 Welcome back to 1 out of 5 – Would Recommend, where the author is the editor and can change his mind at the last second. Since the full series set came out last week, we’re taking a look at the pilot episode of 1990’s Cop Rock this week.

The episode follows several LAPD police officers in the days after a drug bust as they deal with the consequences in different ways: one tries to help a single mom junkie caught up in the bust, another tries to catch one of the dealers who is freed on bail (and later murders a cop), another deals with the death of his partner, etc. Pretty standard stuff.

Except for the parts where they break into song. That’s…odd.

Co-created by legendary TV producer Steven Bochco, creator of Hill Street Blues, L.A. Law, Doogie Howser, M.D., and NYPD Blue. The man is, quite rightfully, highly respected in the world of television – which makes this bizarre show all the more inexplicable. Then again, considering the show about a teenage doctor was a big hit right before this came out, he had good reason to go with his gut.

Overall, the series is a paint-by-numbers police procedural and would be utterly forgettable if it weren’t for the musical aspect. The songs are light in the first half of the episode but come fast and furious in the second half, which is – let’s be honest – the only reason you’d bother to watch this show. It’s a fun and inexplicable piece of 90’s pop culture, and definitely worth watching just to say that you have. 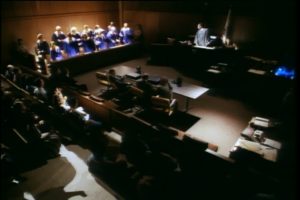 This aired. On a major network.

NEXT WEEK: We return you to your regularly scheduled Strike Commando review.