If this is Friday, then this must be Greg Turner‘s Retro Review!  This week I’ll be looking at Marvel Comics’ John Carter, Warlord Of Mars # 11.  This bronze age beauty is cover dated April 1978.  And features a lovely cover drawn by Dave Cockrum.  The inks were done by Dave himself, with the possible assistance of Rudy Nebres.  I think that Dave inked the Dejah Thoris figure in the foreground, and Rudy likely inked the background figures.  But that’s just my opinion and by no means fact.

The comic story is entitled; “The Story of … Dejah Thoris”  and is written by Marv Wolfman, with the art contributed by the afore mentioned Dave Cockrum and Rudy Nebres!  And if you care about these things, the lettering was supplied by Irv Watanabe and the colors by Glynis Wein!  It seems appropriate to look at a John Carter comic book this week, since the new Disney movie featuring John Carter opens on the big screen.  It looks like it might be pretty good, based on the trailers that I have seen!  I definitely plan on checking it out, but now back to the regularly scheduled review.

Issue eleven is advertised as a special saga of Barsoomian proportions!  I don’t know if it lives up to that hyperbole, but it is a nice issue.  In a nutshell, this issue tells how John Carter and Dejah Thoris met, and became lovers!  So that ought to tie in nicely with the movie this week!  One other quick aside, Dave Cockrum inked the splash page of Dejah Thoris, while Nebres inked the remaining sixteen pages. 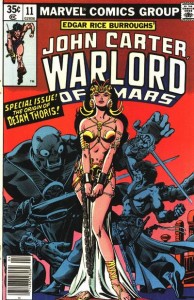 Wolfman begins the story on the second page, with John Carter thinking back to his early days on Mars, when his guardian and teacher was the green female Martian, Sola.  She taught John the Martian language and he had to go through the incubation ceremonies.  On the fourth day of the ceremonies, the green, four-armed Martians watch an armada of flying ships crest their city and respond by firing upon the flying crafts.  These were the first air ships that John Carter has ever seen!

The air ships returned fire and John makes his way to the Martian, Tars Tarkas, with many questions.  Tarkas responds “stay back, red-man … unless you want to join your dead brothers in the sky!”  The last ship is blasted from the sky and the green Martians recover a single prisoner.  Yep, you guessed it, the Princess, Dejah Thoris!  John’s first look causes him to stand slack-jawed and wide-eyed!  The prisoner was a girl, b”eautiful, her eyes large and lustrous, her head surrounded by a mass of coal-black hair, her skin a light copper color, and the ruby of her beautiful moulded lips shone with a strangely enchanting effect.”

Eventually she is brought before the Jed, or Chieftain, of the Tharks, the green Martians John Carter is with.  The Jed asks why the girl has invaded their territory and she simply says that they didn’t!  They were a scientific research party, re-charting the Martian air currents.  She is struck by one of the guards for daring to talk back to their Jed and John reacts quickly, coming t her aid, leaving the guard “bleeding and lifeless” on the floor!

It turns out the guard carter slew was the eleventh most powerful of the Tharks, and therefore Carter has assumed his place in the Thark hierarchy.  He uses his new found power to bring Dejah Thoris to him and they get to know each other.  Eventually they fall in love, but a couple of the green Martians plot to kill John Carter and Dejah Thoris.  With Sola’s help they live and eventually escape and make their way to Dejah Thoris’ city of Helium.

The last panel of this story shows the wedding of John Carter to Dejah Thoris!  Quite a difference from Fantastic Four Annual # 3, that covered the wedding between Reed Richards and Susan Storm and took most of the giant-sized story to tell that tale! 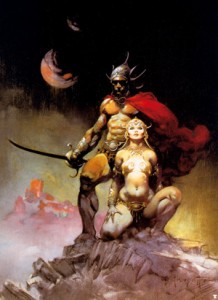 And as once last treat, here is master artist, Frank Frazetta’s version of John Carter and Dejah Thoris for your viewing pleasure!

This issue is an excellent comic to own, if for no other reason than the background story of John Carter of Mars.  It doesn’t tell the story of how he got to Mars, but it does summerize his early days on Mars and how he first met the love of his life, Dejah Thoris.  I give this comic four (4) out of five (5) Legion Flight Rings!

That’s it for this week’s Retro Review.  See you all here again next Friday!