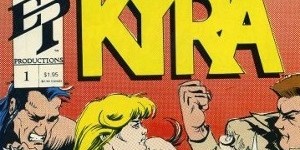 Good day to you all.  If you’ve found your way back, I’m here to reward you with a new RETRO REVIEW.  This week it’s time for an independent publisher and I’ve selected one you may have never seen before.  Is any one familiar with Elsewhere Productions?  Well in 1985, they published a comic book entitled; Kyra # 1.

This premiere issue featured not one, but two complete stories.  The first was all new, the second was reprinted from a very small press underground comic book, which I have not been able to find out anything about.  So if anyone has any further information I’d really appreciate you sharing it with me.

But back to Kyra # 1.  The cover is drawn by creator, writer and artist; Robin Ator.  Take a look: 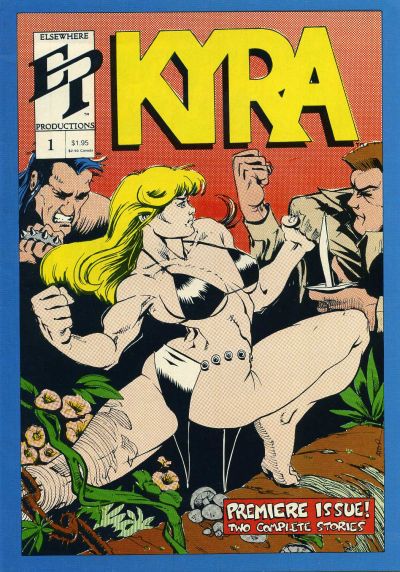 The interior is all black and white artwork, no color, which really shows off Ator’s line work well.  The story is entitled; “A Rustle Of Feathers” and it is written and all of the art is by Robin Ator.  The book opens with a quote from Aristotle; “Men always want more and more without end.  For it is in the nature of desire not to be satisfied, and most men live only for the gratification of it.”  Hmmn, almost sounds like us comic book collectors?  At least that’s the first thing I thought of after reading that quote!

The comic has an written introduction, explaining that Kyra, Mistress of the Jungle, is the daughter of a previous jungle heroine, Kageena, who was created by Eugene Bilbrew.  The adventures of Kageena were sold mostly through the mail from Peerless Sales, who mostly produced fetish publications, though today these would be considered quite tame, but in their day were considered risque, featuring girls battling men or other women.

Kyra # 1 begins with Kyra travelling through the Jungles of Asia, when she hears a scream cut through the silence.  She investigates and finds an old man being tortured by a band of natives, overseen by a woman in a black hood.  They are trying to get information from the man on the location of some sort of natural resources, but he refuses to give them the information they seek.

Kyra drops into their midst and fighting off the natives, sends the old man running to freedom, as she turns to face the woman in black.  The hooded woman forms a fireball and hurls it at Kyra.  She manages to avoid it and escapes carrying the old man who has now collapsed.

Ator interrupts his story at this point and provided a one page origin flashback on page seven (7).  On page eight, he shifts the scene to Bangkok, where the hooded woman is revealed to be Johanna Starling, some sort of witch or sorceress, who runs a modern day corporation.

The scene quickly shifts again and Ator shows a titillating scene of Kyra bathing in a jungle pool.  Then Kyra enters a village, where Starling has men posted to do away with Kyra if she should show up there.  The men attack Kyra as she leaves the village and we get three (3) pages of Kyra overcoming the hired killers.  As Kyra turns the tables Johanna Starling appears in a flash of light and a booming sound.

Using her sorceress powers she tries to crush Kyra, but Kyra sees through her illusions and fights back  Starling raises a zombie from a grave and sets it upon Kyra.  Kyra is forced to battle the zombie over the next four (4) pages but defeats it.  You’ll have to buy the comic to find out how.  I wonder if the Walking Dead comic or television show has ever used this method?  I don’t think so, or at least I’ve never seen them do so in the comic pages or on the show.

It’s at this point that Starling teleports away, threatening Kyra the whole time, but admitting to herself, that Kyra has won this round and that she only has enough power left to return home.  This leave Kyra to wish she could defend her jungle better, but the villagers understand what she has accomplished, even if she doesn’t.  And the first story ends here.

The second story, also written and drawn by Robin Ator, as I said before, is actually an earlier story, that is reprinted here.  The art is a little more “rough around the edges” and might be a little more of a “fetish quality”, based on the positions that he draws his heroine swinging through the jungle and again features Kyrsa bathing in one scene, but it actually shows less than in the first story in the book.

It’s entitled; “Jungle Justice” and features Kyra battling a corrupt mercenary, who is lost in her jungle domain, and who is a murderer, many times over.  Ator spend the first six (6) pages lovingly drawing his jungle heroine swinging through the jungle and finally has the mercenary sneaking up on the bathing Kyra, where a four (4) page fight takes place.  As you can image, Kyra wins handedly, or maybe that should be leggedly!  Again you need to comic to understand that last comment.

The back cover of the comic features a full color photo of female model and bodybuilder, Lori Walkup, as Kyra, Mistress of the Jungle. 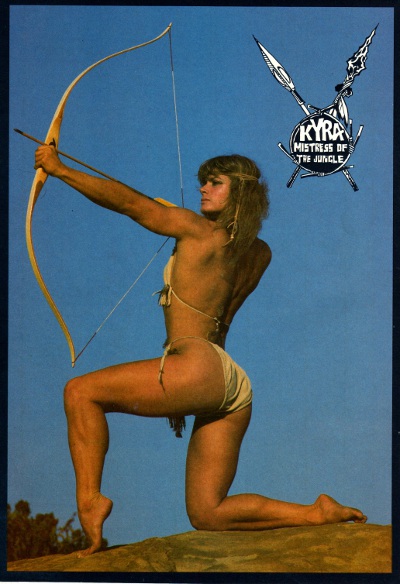 I do not know much about Ms. Walkup, but with a name like that, I might venture to guess that she has some native American ancestry.  She may not be quite as zaftig as the comic book heroine, but that is quite a form she is showing off is our heroine.

I thought I’d leave you with one additional picture of Ms. Walkup, I’m not sure if she’s posing as Kyra, or not in this picture, but based on her costume, she may very well have been.  You be the judge. 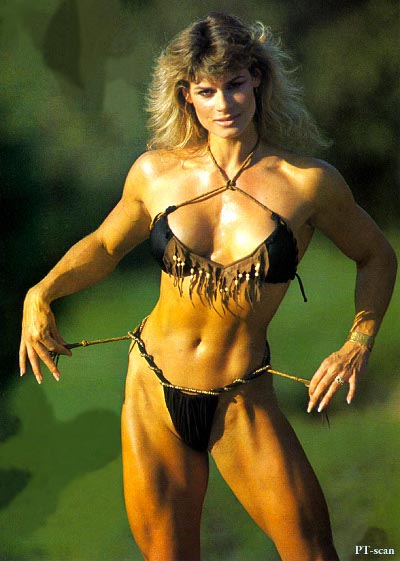 The series did not last very long, only five (5) issues between 1985 and 1987.  But in 1988 a Kyra trade paperback was published with the material intended for issue six (6) through eight (8).  So Ator was able to complete Kyra’s story if nothing else.

Maybe today, with interest in Jungle Girls again being high, or at least on the rise, it’s time for Robin Ator to bring back Kyra, Mistress of the Jungle!   What do you think?

That’s it again for this edition of RETRO REVIEW, but please come back next week for a new Fabulous Find.  Be seeing you …