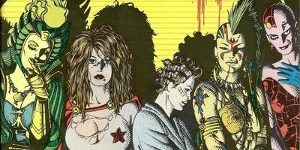 Send up flare, or better yet, a rocket, it’s time for a new RETRO REVIEW!  This week I’m looking at the magazine-sized Love and Rockets # 1 from Fantagraphics Books, cover dated September 1982.  It’s a black and white comic book with color covers.  And pretty much introduces the world to a trio of brothers, Gilbert, Jaime and Mario Hernandez.

Actually the first issue of this comic was a self-published version of this first issue that the brothers put together and sold at the 1981 San Diego Comic Con.  Both the insides and the covers were printed in black and white.  And the following year, Fantagraphics reprinted it with color covers and sold it for $2.95 a copy.  This is the copy most of us know and love!

In fact, this first issue has been in such demand that it has seen three additional printings from Fantagraphics.  The second printing (or was this the third?) was published in July 1987 and was cover priced at $3.50. The next printing was in February 1992 and had a cover price of $3.95, and finally it was printed again, dated May 1995, this time with a cover price of $4.95.  So it is easy to tell which printing you own.

The first issue sported a very cool cover pencilled and inked by Jaime Hernandez.  Here it is: 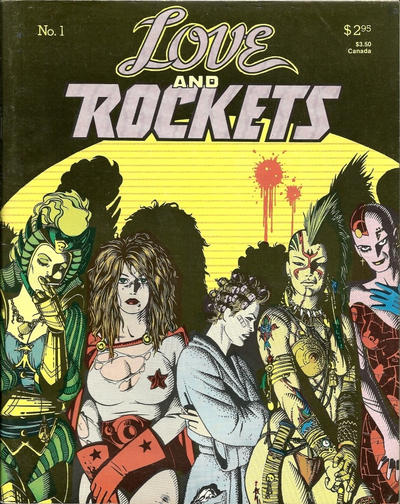 Now that’s a line-up if I ever saw one!  Though I thought line-ups were suppose to contain similar looking suspects!

The comic was made up of eleven (11) stories, or at least chapters featuring various characters mostly written and drawn by two of the brothers, Gilbert and Jaime.  The longest story included in this first issue was “BEM” and there were five (5) individual chapters of eight (8) pages each included, for a total of forty (40) pages of story in this first issue.  This continuing story was written, pencilled and inked by Gilbert Hernandez and features characters based in a fictional city of Palomar, located somewhere in Latin America.  Luba, one of the characters appears to be the central figure to these stories.

Also beginning this first issue is an eight (8) page introduction to “Mechan-X”, featuring the characters Maggie and Hoppy.  The stories can be lumped under the heading; Hoppers 13.  The stories follow the tangled lives of a group of primarily chicano characters, from their teenage years in the early days of the California punk scene to the present day. (Hoppers, or Huerta, is a fictional city based on the Hernandezes’ home town in California.  Two memorable members of Jaime’s cast are Margarita Luisa “Maggie” Chascarrillo and Esperanza “Hopey” Leticia Glass, whose on-again, off-again romance is a focus for many Hoppers 13 storylines. The series is also often called Locas (Spanish for “crazy women”) because of the many quirky female characters depicted.

If I’m honest, I like the Hoppers storyline better than I like the Palomar storyline, but both are well worth reading.

This comic book was one of the first comic books published in what became the alternative comics movement of the 1980s.  The Hernandez brothers produced their stories independently of each other.  Gilbert and Jaime produced the majority of the material throughout the run, including all of the stories in this first issue.

If you have never ventured into the world of Palomar or Hoppers, I definitely recommend that you seek them out either through the individual comic books, or through the reprinted trade paperback series, also published by Fantagraphics.

Hope you enjoyed this edition of RETRO REVIEW, and please return next week for a new Fabulous Find.