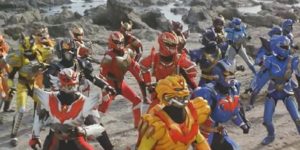 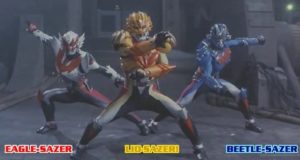 Welcome to Tokusatsu Gesundheit, where today we’re giving Toei a rest (though they are the most easily found Toku maker in America) and paying a visit to Toho’s Chouseishin franchise with Sazer-X: The Movie!

An ancient alien energy vampire known as Bosquito is menacing Earth! The creature is attacking Earth on two fronts: it is regenerating a body from a fragment left on the planet after its last defeat AND it has set a ghost ship filled with its extraterrestrial prey to crash into Japan! The Sazer-X team will have their hands full with this one, and complicating matters are the clones of their predecessors the Justirisers that Bosquito is spitting out! 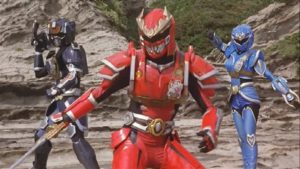 Though officially the theatrical feature for Chousei Kantai Sazer-X, the third and final series in the Chouseishin franchise, Chousei Kantai Sazer-X the Movie: Fight! Star Warriors actually crosses the series over with its predecessors Chouseishin Gransazer and Genseishin Justirisers. Between the three of them, the franchise ran from 2003-2006 in an attempt by Toho (best known stateside as the home of Godzilla & friends) to get in on Toei’s Kamen Rider & Super Sentai success.
The film is directed by Kazuki Ōmori, who had previously directed Godzilla vs. Biollante and Godzilla vs. King Ghidorah for Toho. 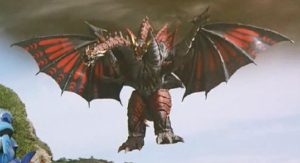 The movie was overall enjoyable, with a satisfying, if thin, plot and above average suitmation sequences. My enjoyment was hampered slightly by my lack of familiarity with the shows it crosses over, though admittedly adult English speakers were probably not the flick’s target audience.