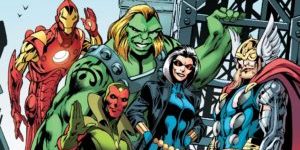 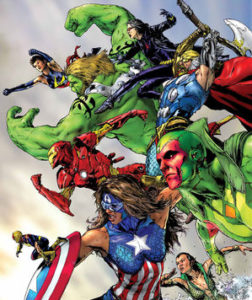 Welcome back to Strange Times & Places, where today we’re looking thirty years into the future of the Marvel Universe to the year 20XX – the time of the A.V.E.N.G.E.R.S. Initiative!

Like most possible futures, this one is a For Want of a Nail story. Interestingly, the point of divergence had not yet been published when it first appeared – I don’t know if Al Ewing knew something fans didn’t when he conceived it or if he just saw an opportunity & rolled with it.

Speaking of Ewing, Avengers from this future have shown up in the pages of three different Avengers series he’s written (debuted in the Ultron Forever mini-series before appearing in New Avengers and U.S. Avengers) via interdimenionsal travel, so we’re examining the world itself rather than a particular story set in it. 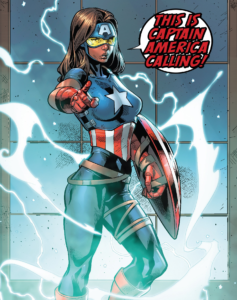 What’s the Point of Divergence?

In the mainstream Marvel U, the return of Thanos to Earth claimed the life of War Machine and kicked off the second superhero Civil War. In the past of 20XX, it killed half of Earth’s superheroes. Natasha Romanov, the Black Widow, rallied the remaining heroes to kill the Mad Titan and form the A.V.E.N.G.E.R.S. Initiative (think The Avengers mixed with SHIELD) to better protect the world. 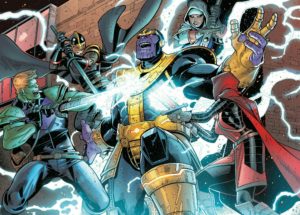 The Death of Thanos, because it look so cool.