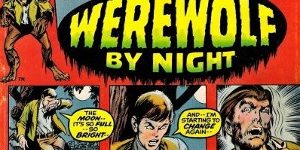 Welcome back for this week’s RETRO REVIEW!  This time around I’ll be looking at Marvel Spotlight # 2, which is cover dated February 1972.  This book, from Marvel Comics, introduces Jack Russell, who becomes the title character, Werewolf By Night.  The comic features an interesting, though uncredited, cover by Neal Adams, with inks done by Tom Palmer.

Here is the cover in question: 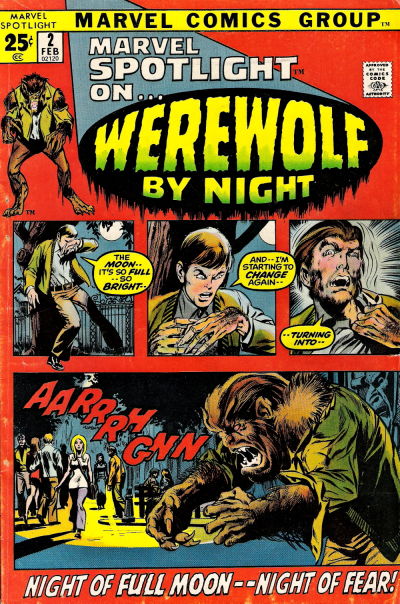 The comic itself is written by Gerry Conway, from a plot by Roy & Jean Thomas, and drawn by Mike Ploog, his first Marvel work, if I’m not mistaken!  Mike also supplied the inks over his own pencils.

The story is told in the first person, from the lead character’s point of view.  And it begins with a bang, as the Werewolf By Night confronts a knife weilding mugger and kills the assailant.  Yes that’s right, he killed the mugger!  This wasn’t going to be your ordinary Marvel comic book hero, two pages in, and he’s already killed someone!

The Werewolf flees from the LAPD, and then the scene is quickly shifted, to the next morning, where Jack Russell awakens from a “strange dream”.  We then are introduced to the rest of Jack’s family, his mom, his sister, Lissa, and his step-dad, Phillip.  Then after another hairy night of the Werewolf, Jack wakes to find his mother in the hospital, dying!

Jack sneaks in to see her and she reveals his dark heritage to him, that her first husband, and Jack’s father, was a werewolf and that the curse has been passed down to Jack;, to become a werewolf on the first full moon after his eighteenth birthday and every full moon thereafter.  Before passing away, she pleads with Jack and secures his promise to never raise a hand against his step-dad.

Future storylines were nicely set up by hinting that Jack’s step-father may have had something to do with his mother’s death, so he could inherit her money to pay off some large debts he had incurred.  But the story ends with the Werewolf By Night holding back from harming Phillip due to the remembered promise made by Jack!

All in all, a pretty nice beginning to a series that was made possible by the recent loosening of the Comics Code to allow the depiction of werewolves, vampires and other monsters, within the pages of Comic Code approved comics.  This 25 cent issue was completed with a golden-age back up story, featuring the character, Venus, the Goddess of Love and Beauty, drawn by the great Bill Everett.

A very nice comic, but not a great book!, but it certainly opened up a new genre for Marvel Comics to tap into, and featuring some very nice, early, Mike Ploog artwork.  And you can never go wrong picking up a book that Ploog has supplied the artwork!

If you don’t already have this comic in your collection, I highly recommend that you track one down and add it.  You won’t be sorry!

That’s it for this RETRO REVIEW, but be sure to return next week for a new Fabulous Find.   Stay warm and try not to hurt yourselves shovelling all the snow we’ve already got here in Michigan.  In fact, stay inside and curl up with something or somebody warm and enjoy a beverage of your choice.  be seeing you …