Hi there folks, I’m back this week with a new RETRO REVIEW for your reading pleasure.  Digging around deep within the comic book vault, I came upon this little gem, cover dated March 1977, Marvel Team-Up # 55, from Marvel Comics.  The basis for this series was the teaming up of two heroes facing off against a variety of villains.  Generally, Spider-Man was featured, but occasionally another hero would sub for Spidey.   Issue number fifty-five featured Spider-Man and Warlock.

Here is the cover to Marvel Team-Up # 55, as penciled and inked by Dave Cockrum: 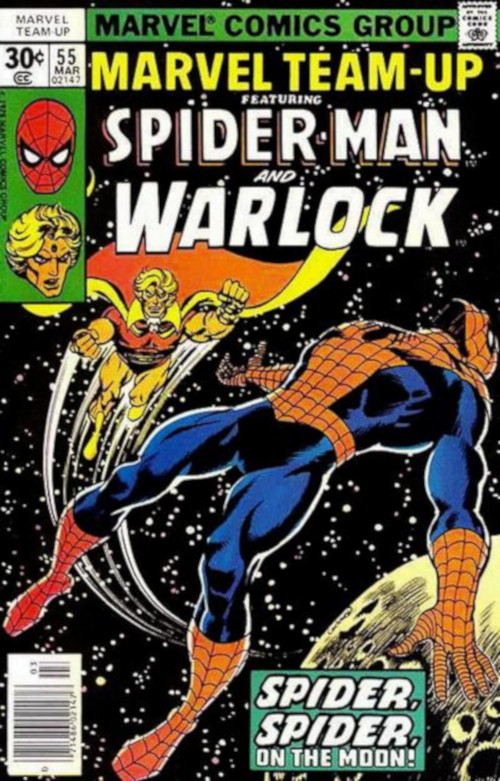 In the previous issue (#54), Spider-Man had been launched into space in a rocket and even the Hulk was unable to stop this from happening.  And as issue # 55 begins we see Spider-Man loosing consciousness as the rocket soars space-wards.   We also get four panels showing both the Hulk and Woodgod (who also appeared in the previous issue) leaving helpless to save Spider-Man.  As Spider-Man attempts to make peace with dying, as  the oxygen levels are falling towards zero.  It is at this moment that a huge Adam Warlock discovers his plight.  He senses life within the ship though it is failing and so he uses his power cosmic to draw the rocket-ship down to the blue-area of the moon.  (For those not in the know, this is the area where the Watcher has lived as he watched over the Earth and it had oxygen).

Oh, before I forget, this issue was scripted by Bill Mantlo, penciled by John Byrne and inked by Dave Hunt.

Meanwhile, Spider-Man has been revived by another Elder of the Universe, The Gardner.  Spider-Man once again attacks the Stranger, and with the secret help of the Gardner and a rescued Warlock, the Stranger is overcome and he manages to teleport to Earth (where he next appears within the pages issue # 12, of the short-lived series, The Champions.

The Gardner disappears for greener worlds and Warlock whisks Spider-Man back to Earth.  All in all a tightly paced story which returns Spider-Man to Earth, and allows John Byrne to draw Jim Starlin‘s Warlock, and a pretty nice job he does of it!  And I love the title, which is shown on the cover; “Spider, Spider, On The Moon!”  It really does say it all, doesn’t it?

That’s all she wrote for this RETRO REVIEW, but check back next week for a new Fabulous Find.  Til then, enjoy the fall weather and I’ll sign off with my usual …