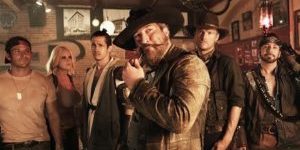 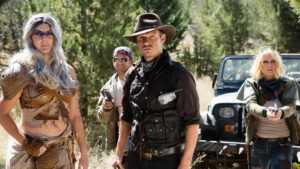 Nick Carter as a mysterious Man in Black…and some other people.

Welcome back to 1 out of 5 – Would Recommend, where today we’re celebrating the Halloween season (and my perpetual infatuation with 90s popular culture) and watching the SyFy/Asylum joint Dead 7.

It’s the Magnificent 7, after the zombie (excuse me, copperhead) apocalypse, starring members of pop groups from the late 90s and early 00s. They’re ostensibly playing characters, but I *defy* you to see them as anything else besides TRL mainstays. 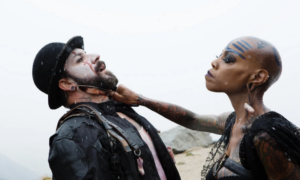 The villains of the picture.

Lots of film professionals, but we’re gonna focus on the film’s star and “Story By” credit Nick Carter. Carter was the driving force behind the Backstreet Boys comic book one-shot back in his heyday, co-writing it with the likes of Stan Lee and Steve Gerber and also apparently contributing some art. Through that lens, it becomes decidedly less surprising that this movie was conceived. 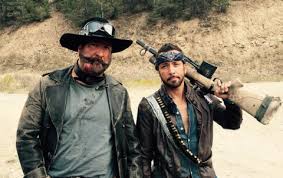 The movie is a bit of seasonally appropriate fluff, elevated beyond the standards of the usual Syfy and/or asylum fare by…well, seemingly a bigger budget, one no doubt secured through the “strength” of its cast. BSB members Nick Carter & A. J. McLean and the aforementioned Joey Fatone are the standouts among the flick’s non-actor cast, delivering convincing if hammy performances. If you’re looking for something stupid to put on in the background this October, it is on Amazon.

Side note, it’s a real criminal crime that this movie was finished and got distribution but The Order, the action flick created by and starring former Power Rangers, languishes in development hell.