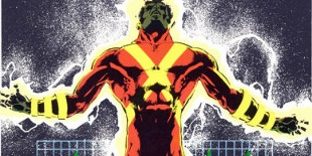 This week, I’m looking at an independent comic book for my RETRO REVIEW.  So digging around in that section of my comic vault, I’ve pulled out another little known (maybe) comic book.  That book; Megaton # 1 from Megaton Comics of Elgin, Illinois.  Gary S Carlson is listed as the editor and publisher.  The comic sold for $2.00 and it is dated; November 1983 on the indicia page.  Interesting is the fact that the book is an anthology comic, that features nine (9) new stories in this their first issue.  The page numbers of the stories vary, and are between four (4) and ten (10) pages.

But first things first, let’s take a look at the cover to the first issue: 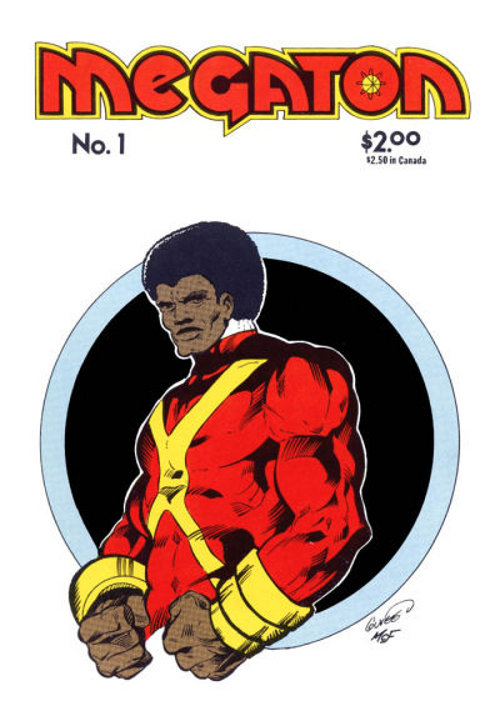 A pretty stark cover, but the hero, Megaton, certain pops from the white background, don’t you agree?  It is pencilled  by Jackson “Butch” Guice and it was inked by Ken McFarlane.  The series only last eight issues, of which I own the first four only.  Not sure if I dropped it because I wasn’t enjoying the series, or, more likely, the comic store I was frequenting back in 1983, stopped carrying it.  Hey, that was thirty (30) plus years ago, so sue me if I don’t exactly remember this lesser known series and my buying habits.

As I said above, this anthology series featured the introduction of nine new series, so I better jump right in, as we’ve got a lot of ground to cover.  First up was a Table of Contents on the inside of the front cover.  By the way, it’s only the front cover that is in color.  The interior stories, as well as, the back cover are printed in back & white.

The first story is entitled; “Sins Of The Father” an introduces the character; Ultragirl.  It runs seven (7) pages and is written by Gary Carlson, though it was credited as being written by Salamander Deadfish (I kid you not!).  The breakdowns/layouts for the art were done by Butch Guice with the finished pencils by James Cassara, with the inks provided by Guice (pages 1-4) and someone listed as Oddjob (pages 5-7).  Carlson did take credit for the plot on the story.

The second story is entitled: “The City At Sunrise” and was written by John Cosgriff and both pencilled and inked by Gene Day.  this story only ran four (4) pages.  This is a science fiction story with a robot defending a city.

The third story features the cover hero, Megaton, and it is entitled; “The Pulsar Project”.  It is the longest story in the comic and it is ten (10) pages.  It is also written by Gary Carlson and the penciller is Mike Gustovich and the inker is Sam De La Rosa.  Megaton is introduced to the reader and his origin is given, as well as his opponent, Pulsar.

The fourth story features another new character; Berserker, in a story, also simply entitled; “Berserker”.  It is written by Gary Carlson and pencilled and inked by Ken Landgraf.  This story runs eight (8) pages and features Berserker going up against Lord Anthrax.  With a name like that, you sure can tell he’s a bad guy!

The fifth story introduces the reader to another new hero, this one is Vanguard.  Conceived and plotted by Carlson, but written and pencilled by Erik Larsen, with the inks provided by Sam De La Rosa.  The story is entitled; “Vanguard”, so neither Carlson or Larsen got very creative with the title.  In the very next issue (#2), Larsen’s character, The Dragon, shows up, before he appeared his own comic book, over at the newly created Image Comics!  Vanguard is an alien who has been assigned to watch over the Earth.  Vanguard goes up against a Russian robot called Cosmo VII in this his first appearance.  Oh yeah, this story takes up seven (7) pages, for those still counting.

Story number six features; the Sentinel in a story entitled: “Sidekicks”.  It is also written by Gary Carlson and runs seven (7) pages.  The pencil art is provided by Chris Ecker, with the inks completed by Dan Reed and Ralph Cabrera.  In this story the Sentinel fights Headhunter.

Which brings us the the seventh story, entitled: “Night Of The Skull” and features a superhero known as the Skull.  It is only four (4) pages and the story is written by Carlson with both pencils and inks done by Ralph Cabrera.

Next up is story number eight (8), entitled; “Ethrian” and features a character called, Ethrian.  It’s written by Carlson with both pencil and inks provided by Frank Fosco.  This story is eight (8) pages long and introduces the space faring hero, Ethrian.

An finally that brings us to the ninth story, entitled; “The Summoning!”.  The story introduces the reader to Kevin Prentice, an earthling, who is summoned before a wizard on the planet, Callandra.  The over all series appears to be; “Wizards Of War”, and this is the first story in that series.It also is written by Gary Carlson with the pencils and inks done by Dan Reed.

In all, six of the nine stories are continued in the next issue, so these stories should be considered part one.  The series are the ones featuring, Ultragirl, Megaton, Vanguard, Sentinel, Ethrian and the Wizards of War.

There is a lot to like in this first issue, but the reader is also overwhelmed by the sheer number of new characters, concepts and story lines being thrown at them.  Obviously there were issues, or the series would have lasted more than eight issues.

Anyone else out there that remembers, Megaton and Megaton Comics?  If you do, give me a response.  I’d like to know if anyone that reads my posts owns the last four issues that I don’t have in my own collection, and if they are worth tracking down.  I believe there was a special, also called Megaton, but it might have been done as a parody, rather than a serious issue.  I don’t own that either, so if anyone has information on that one, please share.

Okay, that’s enough for this RETRO REVIEW, but please come back next week for a new Fabulous Find.  Till then, stay fabulous!