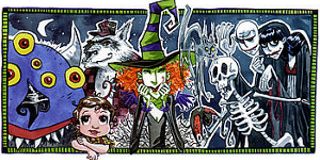 It’s definitely October and the weather is starting to feel a little crisp and the leaves are beginning to change colors, so that means Halloween is right around the corner.  And to help you get into the mood of all things spooky I thought I’d feature a comic book closely associated with Halloween, Scary Godmother for this edition of RETRO REVIEW.  The characters and the comic is the brainchild of Chicago artist, Jill Thompson and the comic is published by Sirius Entertainment, Inc.  The comic is dated February 1998.  Why am I writing about a Halloween comic that was published in February?  Good question and allow me to answer.

The previous year, artist and author, Jill Thompson had published a storybook featuring her character, Scary Godmother, which looks just a tad like the artist herself.  Thompson was looking for a Halloween themed book to purchase and give to her niece, but was unable to find one she liked.  So she decided to do something about it and created Scary Godmother and her world.  The picture book met with some success and Jill decided to bring the character to the comics, as well.  And this issue, Scary Godmother Bloody Valentine Special was the result. 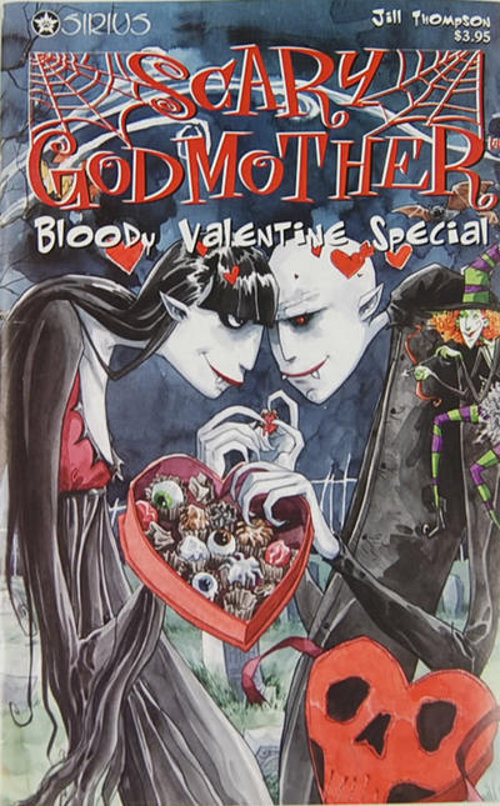 In the initial picture book, the story took place at Halloween and Hannah treat or treating,  In this book, Hannah’s cousin, Jimmy, didn’t want to take Hannah trick or treating, so he and his friends instead plan on scaring her. However, his plan backfires after Hannah befriends Scary Godmother and her broommates, all of whom give Jimmy and his friends a taste of their own medicine

In this comic six months later, the setting is Valentine’s Day and we find Hannah Marie visiting her Scary Godmother and as they are having tea, the Queen of the Night, Ruby, comes by for a visit, along with her teenaged son, Orson (Prince of the Night).  Needless to say, they are both vampires.  Remember these stories are all Halloween based, evenn if they happen to take place at Valentines’ Day!

Hannah and Orson hit it off immediately and run off to play.  Thompson then gives us the back story on Ruby and her husband, Count Maxwell.  It appears that they have had a fight and he has turned into a bat and flown off.  Meanwhile Hannah and Orson have a snack, Hannah some cookies and Orson a juice, I mean, blood, box!  Hannah give Orson a Valentine and they decide to look up where Valentine”s Day came from.

So while those two are doing their research in the library at Scary Godmother’s House, Scary helps Ruby with her husband, Count Maxwell.  Scary and Ruby try on different looks so that Ruby will appeal to Count Maxwell and Count Maxwell, himself, has done to visit the Werewolf, Harry to seek advise.  By the way, Harry still lives with his mother and hangs out in his basement room spending all of his time on the internet!

During all this Hannah and and Orson make Halloween Smores and share the directions with all the readers.  The Count and Harry have their night out and Scary and Ruby also go out with Mr. Skully Pettibone and eventually the COunt and Ruby make up with the help of their son, Orson, who has brought back Valentines for his parents.

And at the end of the book she shares some one page pin-up work by artist friends, featuring her characters; Alex Ross, Mike Mignola and P. Craig Russell, as well as, others.  A pretty impressive first comic book, all in all.  I give it my highest recommendations, for someone looking for something other than super-hero comics.  Oh, in case you care, here is the cover to that first picture book and the first appearance of Scary Godmother: 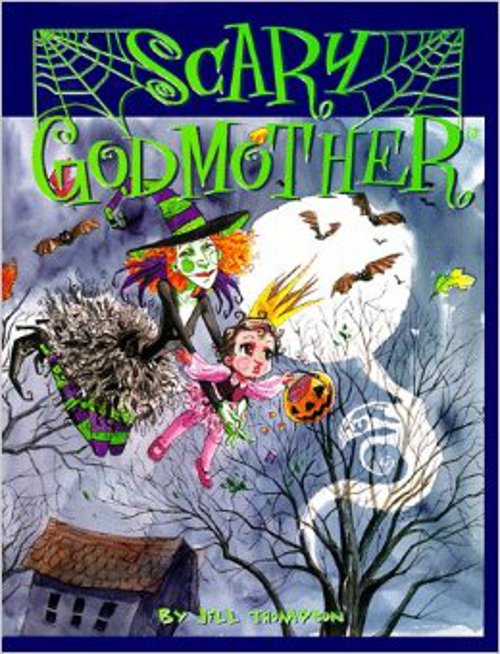 That’s it for this week’s RETRO REVIEW, but please come back next week for a new Fabulous Find.  And here is one more Scary Godmother pic by the talented Jill Thompson, just because I like it: 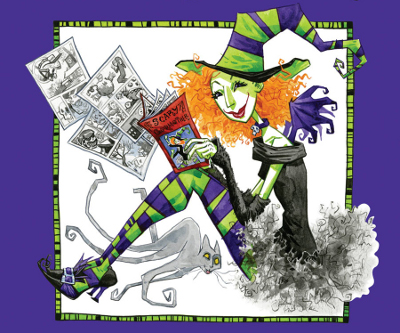 Hope your Halloween is scary and till next time, this is Greg Turner, signing off.   Be seeing you …