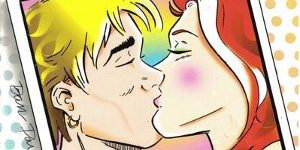 Hello and welcome to the latest RETRO REVIEW, brought to you by Greg Turner.  This week it’s time to venture into the independent section of the comics vault.  And while looking for something completely different, I ran across this little gem, Secret Fantasies # 1, simply dated 1998.  But researching it online, it appears to actually be from May of 1998, not that that’s makes the slightest bit of difference.  The publisher of this short two issue run is Bullseye Comics, and as far as I know, these two issues of Secret Fantasies were the only comics published by them. 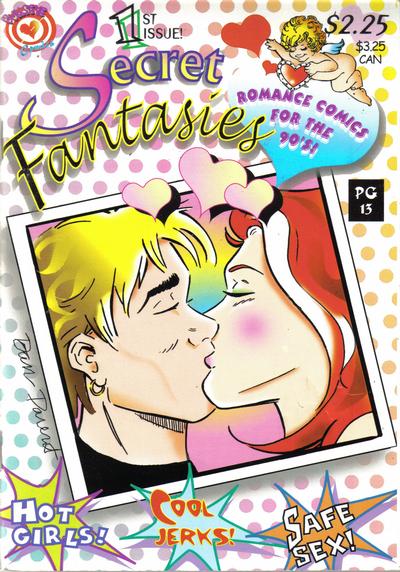 What you can’t tell by the picture is that the actual comic book only measures 5 1/4 inches by 7 1/2 inches.  Though the second issues was printed full comic book size, for some reason Bullseye decided on this smaller, digest size for the first issue.

This first issue contains three stories; “My Love Is Alien!”, “Fat Chance For Love” and “Vampire Girls Need Love Too!”  All of the stories are written and pencilled by Dan Parent and inked by Kim DeMulder.  Dan, you may already know from his work on Archie and his pals in Riverdale over at Archie Comics.  He is a graduate of the Kubert School.

But on to the comic.  As you can tell by the titles of the stories, the comic isn’t necessarily taking itself very seriously.  But the artwork is stellar throughout.  The summary above the title of the first story pretty much sums it up, so I’ll just quote it here for you; “I never thought I’d meet my true love at a sci-fi con geekfest!  But I did, and I never thought it would end up like this!  Now I’m alone, pregnant, and worst of all I believe …” then the title; My Love is Alien!  The heroine of this nineteen (19) page story is Marina, who goes to a sci-fi convention with her girlfriend, Ruthie.  There she meets and falls in love with Phyxabygl.  With a name like that, you’d think that just might be a give away, don’t ya?  Their romance blossoms and one thing lead to another and Marina finds herself pregnant and eventually giving birth to an alien child, though Phyxabygl has vanished.  The story wraps up with Phyxabygl’s return years later to re-establish the happy family of three!

Following this story is a one page; “Catfight Gallery”, number one in a series.  It looks like this one is showing two nurses battling it out.

Next up is the second of the three stories.  This one stars Brenda, who has battled with her weight all her life, but recently has gone on a very successful diet.  The splash page show Brenda kissing a boy while wondering: “I don’t know what’s making me hotter, Jacob’s hard body or the thought of scarfing down that chocolate eclair afterwards!” This twelve (12) page story follows Brenda and her troubles with men and food and eventually her boyfriend dumps her because of her size.  She gets her revenge, of course, by regaining her svelte body through diet and exercise and then leading him on until dumping him for another woman!  Bet you didn’t see that twist coming.

And the third and final story is eleven (11) pages and focuses on Nurse Rhonda Stone, who just happens to be a vampire.  The first couple of pages of this story explains how she becomes a vampire and then meets other vampires. Oh, this is the story that has the panel that the company used in the Catfight illustration page.  Rhonda and a fellow nurse vampire fight over a doctor.  Rhonda comes out on top and the doctor becomes a fellow vampire, so he and Rhonda can live happily ever after.

And that wraps up the first issue.  As I said earlier, there would only be one more issue of Secret Fantasies published and Bullseye Comics were never heard form again.  I think what makes this comic work is the clearly tongue in cheek attitude in the writing and of course, the terrific artwork done by Parent and DeMulder.  It’s a fun read and you can generally still pick it up for cover price on the secondary market, almost twenty years later.  It will never be worth what your Amazing Fantasy # 15, with the first appearance of Spider-Man is worth, but it’s still worth owning!

Hang in there folks and I’ll see ya next week with a new Fabulous Find and again in two weeks for another RETRO REVIEW.