Everyone is talking about the new Star Wars movie and can you blame them?  It was great!  I plan to see it again soon.  And with that in mind, I thought I’d pull out a Star Wars comic for this weeks’ RETRO REVIEW.  And since it’s time for an independent comic, rather than a Marvel Comics book, I’ve brought to light a great mini series from Dark Horse Comics, entitled; Star Wars: Dark Empire.  The mini series ran for six (6) issues and I’ll be talking about the first issue in that run.  It’s cover dated December 1991.  Well, that date actually doesn’t appear on the cover, but does appear in the indicia on the inside of the front cover, so there is no doubt about it.

Here is that cover, featuring a painting by artist; Dave Dorman: 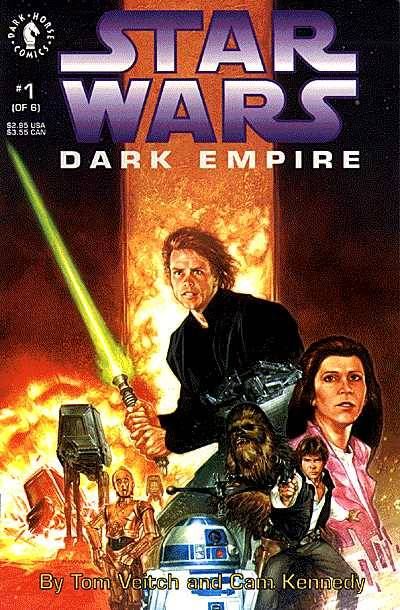 In fact, Dave Dorman painted each of the six covers for this mini series and they are all great.  And just because, here’s a look at a couple of my favorites from the six issue mini series.  Here’s the second issue: 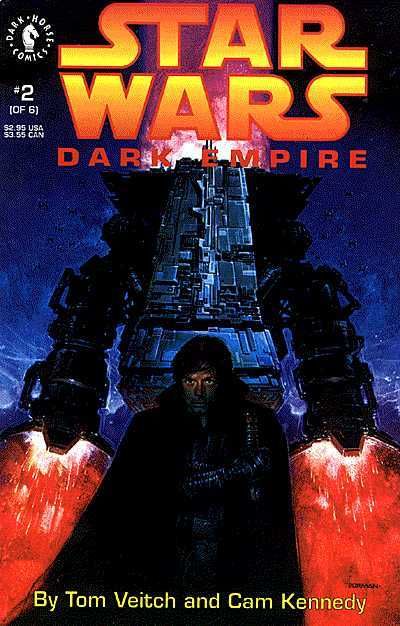 And for the third issue, as well: 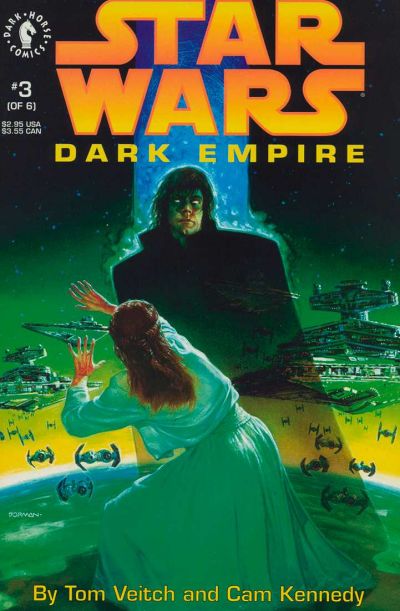 Actually, I could show them all, but I’ll restrain myself somehow.

Maybe just be looking at the first three covers you can get an idea what the series might be like.  But I can sum it up with a single question; what would happen if Luke Skywalker turned to the Dark Side?

The mini series is written by Tom Veitch and the artwork for each of the six issues is done by Cam Kennedy, who provided both pencils and inks for the series.  The series is both well written and well illustrated.

The first issue is entitled; “Book 1: The Destiny Of A Jedi” and the splash page reproduces the movie’s opening word crawl nicely, giving the reader an overview of what’s happened since the death of the Emperor and Darth Vader and the destruction of the second Death Star.

A civil war has broken out among the remaining Imperials and the Rebels have seized the opportunity to sow confusion among the feuding Imperials, using captured Star Destroyers to conduct hit and run sorties into the war zones.  On one of these raids, the Alliance Star Destroyer, commanded by Luke Skywalker crashes on an unnamed planet.

Princess Leia Organa and her husband, Han Solo, along with Chewbacca and the protocol droid, C-3PO, are on a mission to rescue their fallen comrades.  The first half of this first issue shows the steps Leia and Han take to reach the battle that is taking place on the planet where Luke has crashed.

Kennedy does an outstanding job portraying the battles, both in space and on the planet itself.  He draws a mean Millennium Falcon, as well as, very details Imperial Walkers.

Han and Leia finally reached the crash site and exit the Falcon to try to find Luke.  The Imperial Storm Troopers attempt to prevent this act.  Leia uses the Force, as taught to her by Luke, and Han utilizes his trust blaster, fighting to reach Luke’s crashed vehicle.

Just as things are going badly, Luke appears and using the Force like never before defeats an Imperial Walker single handedly.  The heroes are together once again and Leia wants Luke to go with them on the Falcon, but he says no, that he needs to stay on this planet, because he has found some strange clues in a ruined palace near by.  He says that there is a great disturbance in the Force.  And someone, or something, is using the Dark Side of the Force with unbelievable power.

Han says that they will stay by his side and lend him their strength, as well as blasters.  Luke tells him that this is not just another gun battle, but that a vast evil is approaching and that it knows that he is here.  He further says that what will happen is unavoidable, that it is his destiny!  Yep, that’s where the story’s title comes from.

Luke convinces the others to leave, telling Leia that she and her children are the future of the Jedi and that she needs to leave to protect them.  He remains to deal with the approaching evil, of course.  R2-D2 remains by Luke’s side and the first issue ends with Luke and R2-D2 being pulled up into the sky by the power of someone using the power of the Dark Side.

A pretty nifty beginning, if you ask me.  It definitely compels the reader to pick up the next issue to see what’s going to happen.  And isn’t that what any writer wants to accomplish, whether he, or she, is writing for comics or for prose novels.  Veitch definitely accomplishes this with this first issue!

And wait to you see who appears in the second issue.  Someone who we all thought was dead!  But I won’t spoil it if you’ve never read this mini series.  But trust me, you’ll be surprised.

The comic ends with a four (4) page text piece written by Veith, entitled; “From A Tine Of Peace … To A Time Of Darkness”.  He explains that the comic takes place six (6) years since the Battle of Endor, which took place in the third movie, The Return Of The Jedi.  He writes about the Force and the powers of a Jedi, as well as, the Skywalker family.  Essential reading, needless to say, just in case it’s been a while since his readers had seen the Star Wars movies, or is by some chance, the reader has not seen the original movies.

I highly recommend this mini series, it’s a chance to see what would have happened if Luke had been turned to the Dark Side and the steps his sister, Leia takes to save him.

Thanks, as always, for stopping by and taking the time to read my little blog featuring comics and pop culture.  Please check in each and every Friday for a new RETRO REVIEW (like this week) or a new Fabulous Find (like next week).  Till then … be seeing you.