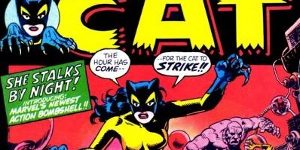 Welcome, one and all, to a brand spanking new RETRO REVIEW, brought to you, as always, from myself and the good folks at Back To The Past.  Hard to believe that I’m in my ninth year of providing content to their website.  Time definitely flies when you’re having fun!  But enough with the cliques, time for the meat and potatoes!  Sorry, I couldn’t help myself.

This week I’ve dug around in the Marvel side of my secret comic book vault and brought to light a rather obscure Marvel Comic book.  The book in question is The Cat, a very short lived series that started in 1972 and was gone before 1973 was over.  It only lasted four (4) issues, but today I’m looking at The Cat # 1, cover dated November 1972.  It’s got a pretty nice cover on this first issue!  It is pencilled by Mirthful Marie Severin and inked by the wondress one, Wally Wood.

Here’s the cover for this fabulous first issue: 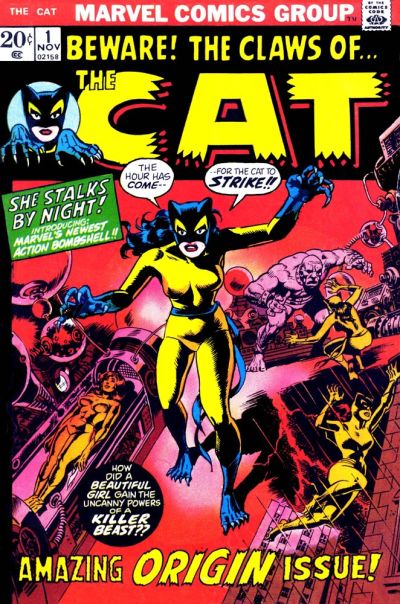 Marie was always a pretty good penciller and with Wood providing the inks for this first issue, it’s a very nice looking introduction to this new character, and also along the way in this first issue, we also get her origin.  Yep, that’s right, The Cat is female, just in case you couldn’t tell from the cover!

So in 1972, a female featured comic book was a pretty rare thing.  Plus the story is set in Chicago, which was also definitely different for Marvel, as most of their heroes were based in New York!  The story is written by lovely Linda Fite, though rascally Roy Thomas helped to co-plot the comic.  The interior artwork was supplied by the same team that did the cover, Marie Severin and Wally Wood.

Maybe on of the reasons the book didn’t last longer than four issues was because the creative team didn’t even stick around for those four books.  Wood left first, after just the first issue.  Then Severin left after the second issue.  Issue three and four were also drawn by two completely different art teams, as well.  The only solidifying staffer was Linda Fite, who provided the script for all four issues.  Of some interest to collectors is that the four, and final issue, waas pencilled by Jim Starlin and Alan Weiss.  Early professional work for both of these gentlemen.

But let’s get back to the comic itself, why don’t we?  The initial splash page has Greer Nelson, i.e. The Cat climbing the side of a building in Chicago when a sudden storm happens and she wonders if her first outing, might be her last!  Lightning strikes and she is tumbled from the building’s side.  She saves herself with the use of a grappling hook.  I really like the thought balloon that Ms. Fite uses, with the Cat thinking … “That’s it girl — Keep it up!  Keep talking to yourself — And maybe you’ll forget that you’re scared out of your wits”!

She breaks a window and enters the penthouse of the building that she has scaled and battles a couple of generic hoods.  She is able to knock out the lights and using her “nightvision” powers she overcomes the crooks and then as she interrogates one, she is overcome by some sort of gas.  As she slumps to the floor, the reader gets a three page flashback, giving us Greer’s backstory.  She met and married a young policeman, but he is shot and killed trying to stop a robbery.

To make ends meet, she gets a job with her old physics teacher, Dr. Tumolo and goes back to school.  It’s at this point that the Cat awakens and the story continues.  She is held captive of the villain of the story, Mal Donalbain.  He plans to open a chain of health clubs and create an army of amazons!  I thought all those Amazons were over in DC Comics!

She breaks free and while escaping, we get another flashback, this one runs six (6) pages, showing how Dr. Tumolo gave Greer her powers, as well as, another woman, Shirlee Bryant.  Actually it is Donalbain that gives Ms. Bryant the Cat costume and pushes her to use her powers, but her first time out she falls to her death.  Dr. Tumolo discovers the costumes at Donalbain’s and rushes to report him, he follows and kills Dr. Tumolo in an explosion.

Greer finds her mentor and she tells her who caused the explosion.  Greer found the costume and put it on, and that’s where we came in.  Rather than fleeing the Cat doubles back and defeats Donalbain’s henchmen this time .  She confronts Donalbain and in his fear he kills himself to evade the claws of the Cat and going to jail.

The issue ends with Greer wondering if she has misused her powers while watching the sun come up over Chicago!  A pretty good origin and beginning story, but unfortunately the premise was wasted and after just four issues was gone from the newstands.

Though the character still exists in today’s Marvel Universe, it is a different woman under the cowl and she is rather underused.  This Cat did go on to join the Avengers for a short while and even had her own series within the last three years or so.

That’s it for this RETRO REVIEW.  I hope you enjoyed it and please come back next week for another Fabulous Find.  Stay frosty!