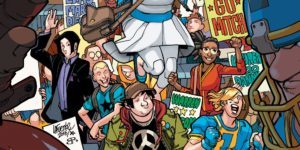 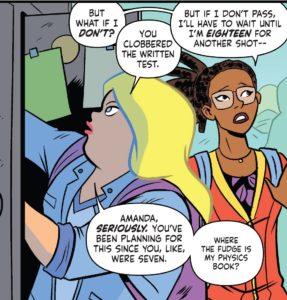 Welcome back to Strange Times & Places, where we’re going to the strangest time and place of all: high school! That’s right, we diving into the world of the High School AU with Valiant High!

Like all such tales, it’s an Imaginary Story that transfers recognizable characters (in this case, those of the Valiant Universe) into a high school setting as a mix of students and faculty. This has been done with The X-Men (several different times), The Avengers, Witchblade, My Little Pony, the entire DCU, and several of Shakespeare’s plays, so it’s well-worn territory by this point.

It’s the start of a new school year and two sets of best friends – girls Livewire & Faith and boys Peter Stanchek & Colin King – will have to navigate all the pitfalls of high school life including unrequited crushes, a volatile social hierarchy, strict teachers, and the homecoming dance. But attending a school for the superhuman means extra surprises, including dark secrets and mysterious evils, beyond those of a standard blackboard jungle.

Trying to fit in the whole Valiant Universe doesn’t leave much room for exposition, explanation, etc. That said, the story does a good job sticking to the main sets of protagonists and explaining supporting cast members as they relate to them. Plus, I don’t think this was meant as a super serious mini-series… 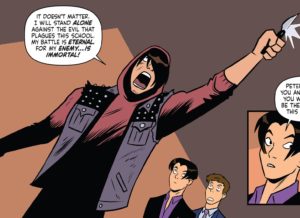 Lucky he’s secretly faculty or that knife would get him expelled.

Come Back Next Week for a New Installment of 1 Out of 5 – Would Recommend!