Hey kids, and those of us who refuse to give up the kid still inside of us, welcome back for another RETRO REVIEW.  This week I’m going way back, to look at D C Comics’ Flash # 106, cover dated May 1959.  The comic actually has two stories and it’s the second one that gets the cover nod, showing the Flash facing off against the Pied Piper, as drawn by Carmine Infantino and Joe Giella.  This is only the second issue of the newly reintroduced hero’s own book, after having starred in four issues of Showcase, numbers; 4, 8, 13 & 14 ( October 1956, June 1957, April 1958 & June 1958). 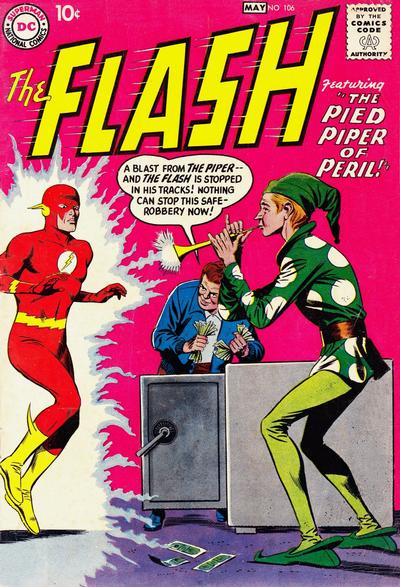 But it’s specifically the first story that I want to talk about.  The one that introduces the Flash villain, Gorilla Grodd to the D C Universe!  The first story is fifteen pages long and is entitled; “Menace Of The Super-Gorilla!”.  It’s written by John Broome and is drawn by the aforementioned Carmine Infantino and Joe Giella.  The story begins with a supersonic craft bursting from out of Africa, only to plunge into the Atlantic Ocean, where it travels underground until it comes up in Central City Park.

The scene then shifts to a friend of Barry Allen (The Flash), Fred Pearson, who is appearing in Central City show, dressed as a Gorilla.  It seems he’s been waking up every morning exhausted, and there have been many sightings of a  fearsome Gorilla loose in Central City each night.  So who does he turn to for help?  Yep, Barry Allen!  On the way to meet Fred, Barry encounters a woman fleeing the park shouting that she’s just seen a Gorilla.  Barry quickly changes into his Flash togs and races into the park, only to be overtaken by a supersonic craft.  The craft alludes the Flash and so Barry goes on to meet his friend.  As the first chapter ends the reader gets a glimpse of the craft’s operator’s hand, and it’s covered by hair/fur!

Chapter two begins with the reveal of a Gorilla who has the ability to think and operate machinery!  The reader then follows the Gorilla to the Central City Zoo, where he finds another captured Gorilla, by the name of Solovar.  Apparently, this Gorilla has recently been caught in Africa and brought back to America and placed on display.  The first Gorilla, using “telepathic radiations” steals the “Force of Mind” power from the second Gorilla!

Once the first Gorilla leaves, the second Gorilla, Solovar, breaks out of his cage and seeks out the Flash!  Solovar reveals that he can talk and also reveals to Flash of the hidden Gorilla City, the evil Gorilla, Grodd (the first Gorilla) and his plans to take over the Earth!  Flash runs to Africa and in a matter of four panels overcomes Grodd by spinning him until he can’t think straight!  Later, when Flash returns Solovar to Africa and to his hidden city, it is revealed that the spinning caused Grodd to lose the Force of Mind power, and he is imprisoned by the Gorillas of Gorilla City!

Wow, Grodd is introduced, his origin told, then Flash defeats him in a, excuse me, flash!  Quite a meager beginning for one of the Flash’s greatest foes!  Almost to easy you might think, eh?  And you’d be right!  As Gorilla Grodd returned to face off against the Flash, in the very next issue, Flash # 107, in a story entitled; “Return OF The Super-Gorilla!” and many many more times over the years!

What is surprising is that Grodd wasn’t featured on the Flash’s cover, either # 106 or # 107, knowing DC’s love of putting a Gorilla on their covers to increase sales!  Grodd didn’t appear on a Flash cover until issue # 127.  Here’s that first cover appearance, in case you might like to see it. 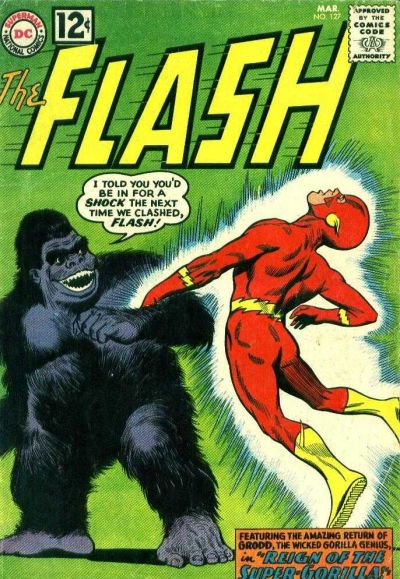 That’s it, other than to say I give Gorilla Grodd’s first appearance in Falsh # 106, only two (2) our of five (5) Lightning Bolts!  But there was plenty more Gorillas to come in the years ahead!