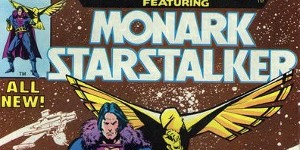 Welcome once again to the blog that never ends, with apologies to Emerson, Lake & Palmer, who’s song title I’ve borrowed and slightly changed.  It’s Friday, and therefore it’s time for a new RETRO REVIEW.  And this week, I’ve ventured into the Marvel section of the vault and pulled out Marvel Premiere # 32, featuring Monark Starstalker.  This comic is cover dated October 1976. which means it was on the racks during the summer of that year, or likely in late June or early July and needless to say was published by Marvel Comics.

This is a pretty obscure character being featured in this comic book.  It fact, it was his only appearance for about thirty-three (33) years, or so.  Does anyone remember this guy?  As I said, nothing was heard of him for over thirty (30) years from this appearance and when he shows up again in Nova, Volume # 4, issues 29 and 30.  Those two (2) issues were cover dated September and October 2009 for those keeping track.

It’s a science fiction story written, pencilled and inked by Howard Chaykin.  Though the cover was pencilled by Chaykin, it was inked by Al Milgrom.  Take a look: 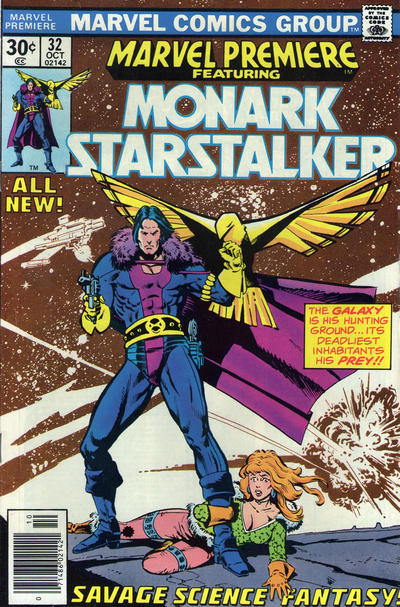 As you can see from the cover, Marvel is billing it as “savage science fantasy!”  And sets things up nicely with the text block saying; “The Galaxy is his hunting ground … its deadliest inhabitants his prey!!”  Notice the use of the double exclamation points there!!  The story itself is simply entitled; “Monark Starstalker”.  Chaykin didn’t waste any brain cells coming up with that title, I bet.

So what’s his story?  Starstalker was once a rigger, a pilot who’s nervous system was hardwired to his ship. Seven years earlier, he and his ship, was attacked by hostile forces and he was forced to escape through the core of a nova. But his escape came with a high price. The ship was struck by massive amounts of the star’s energy which flowed through the connecting sockets, which connected him to his ship, at his wrists and spine, frying his nervous system, senses and memory. Another ship would eventually take him on board, but the doctors gave up on restoring him. However, beings he refers to as the Technos repaired him and gave him an artificial nervous system, in the form of a cybernetic falcon-drone named Ulysses.

Together, with his android falcon, Monark Starstalker, now crosses the universe, as a bounty hunter.  His first appearance, here in Marvel Premiere # 32, takes place on the planet Stormking, a perpetual icy world. He has come to here hunt down and capture a man named Kurt Hammer. After befriending the local sheriff, Bob Hightower, and visiting Triplanet Metals Inc. vice president Emanuel Shaw, he meets Robin Goodfriend. While visiting with her at her home, Shaw and Hightower were killed by Hammer, who escaped with his girlfriend, Brigid Siebold in front of the town of New Canaan’s populace.

The populace informs Starstalker of where Hammer had gone, and Starstalker tracks the man down on horseback, utilizing Ulysses as his eyes, ears and other senses.  When Starstalker catches up to Hammer, Hammer shoots and kills Starstalker’s horse.  Hammer then goes after Ulysses, while shooting at the robot falcon, he inadvertently triggers an avalanche, burying Starstalker.  Thinking him dead, Hammer then begins trying again to shoot down Ulysses, not noticing Monark Starstalker digging himself out of the snow until it was too late.

Starstalker captures Hammer alive and forces Hammer to carry his girlfriend back to town, Hammer dies on the long trek back to town and when Starstalker arrives safely back to town with the girl, he informs the citizens of this. Starstalker then asks them to make sure his claim, for the kill, is registered and asks them to tell Ms. Goodfriend he was leaving.  Starstalker makes his way out of town, back to the spaceport, and leaves on his scheduled flight.

There is not much to like about the character Chaykin has created, but it’s pretty hard with just the one issue to really get the character across. Chaykin did this book after his short lived Ironwolf character, he created over at DC Comics.  That character I liked alot, though he did have a few more stories to get his ideas across to the readers, here he only had the one issue.  Though, obviously the Marvel fans, back in 1976, were not clamoring for the character to be brought back, otherwise I’m sure we would have seen him make a reappearance long before the thirty three years that took place between his appearances!

Maybe his relationship to his cybernetic falcon was too similar to Marvel’s own Falcon, and his bird, Redwing.  I guess we’ll never know, unless Chaykin himself, reads this post and shares what happened way back then.  Wouldn’t that be cool.  But I won’t hold my breath waiting and I wouldn’t recommend you do so either.

Thanks for stopping by and please return next week for a new Fabulous Find.  Adios!