In honor Lord of the Rings: Rings of Power, now airing on Amazon Prime, Back to the Past is highlighting the most powerful rings from around pop culture! For the series’ second week, we’re looking to the world of comic books for the most powerful jewelry in the Marvel Universe. The Ten Makulan Rings have been giving Iron Man trouble for nearly sixty years! Why are they so tough? Read on! 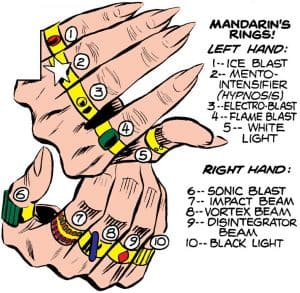 The Ten Rings are a blend of magic and technology. The Makluans, AKA Space Dragons, created them centuries ago. Each one contains the spirit of a long dead cosmic warrior, which can fully posses wearers who aren’t strong of mind. These warriors, naturally, would quite like to inhabit new bodies and use their powers for themselves.

The rings came to Earth as the power source of a Makluan space ship that crashed in China. The criminal mastermind later known as The Mandarin discovered them there. He has used them to menace the Marvel Universe ever since.

Each of The Ten Rings has its own unique power. Four of the rings confer power over a classical element: fire, ice, wind, and lightning. Three confer power over matter: to destroy it (disintegrator), to manipulate it (force beam), and to alchemically change it. Two more control light, one projecting it and one casting a field of darkness. The last gives the wearer the ability to control minds.And that’s just their specialties! Several of the rings confer the ability to fly, and all of them can teleport their wearer.

There’s also an unstated affect on aging. See, The Mandarin appears to be no more than middle aged but is said to have been born prior to China’s communist revolution. That revolution lasted from 1927 to 1949, placing The Mandarin in the same age bracket as Captain America. While that origin was written at a time when that wouldn’t have been the case, it hasn’t been overwritten in the decades since. In the aggregate, the Makulan Rings can make their wearer a nigh-immortal one man army. 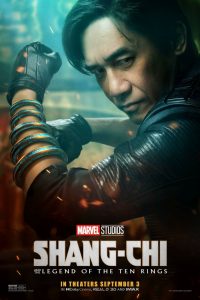 Who’s The Lord of these Rings?

Historically, The Ten Rings all been worn by one man: The Mandarin! For a time, they were wielded by his son Temugin. Most recently, ten different people around the world found themselves in possession of one ring each. Splitting them up reduced the wearers to powerful-but-beatable super-villains. While each ring is powerful, they are most powerful together.

Notably, the Rings have a different history in the Marvel Cinematic Universe. The warlord Xu Wenwu discovered them around 1,000 A.D. and used them to build his army The Ten Rings. Lacking the elemental powers of their comic counterparts, the arm-worn rings of the MCU still have the ability to project and manipulate force, plus they keep the wearer from aging. They’re also psychically tied to the person who wears them, including Wenwu and his son Shang-Chi. This allows them to be used like a combination of Captain America’s shield and Iron Man’s repulsor beams.

How Do They Stack Up Against Sauron’s Rings?

Arguably, they’re somewhat evenly matched. Both grant their wearers unnaturally long lives. Both, as sets, grant their users the ability to conquer a world with some ease (at least in theory). The Ten Rings definitely have the edge in offensive power. Sure, Sauron’s servants can amass wealth and turn invisible but the Mandarin can melt a tank by pointing. The Rings of Power definitely have the edge in control, as breaking up The Mandarin’s set doesn’t give him ten new henchmen. It just leaves him powerless. We’re calling this one a draw.

What do you think? Are we on point or way off base? Comment below or hit us up on social media @b2pcollect. And if you’ve got yourself a collection of comics, perhaps including the first appearance of the Makulan Rings, we’re here to help when you’re ready to sell it! In the meantime, we’ll see you back here in a week for another ode to pop culture’s Rings of Power.