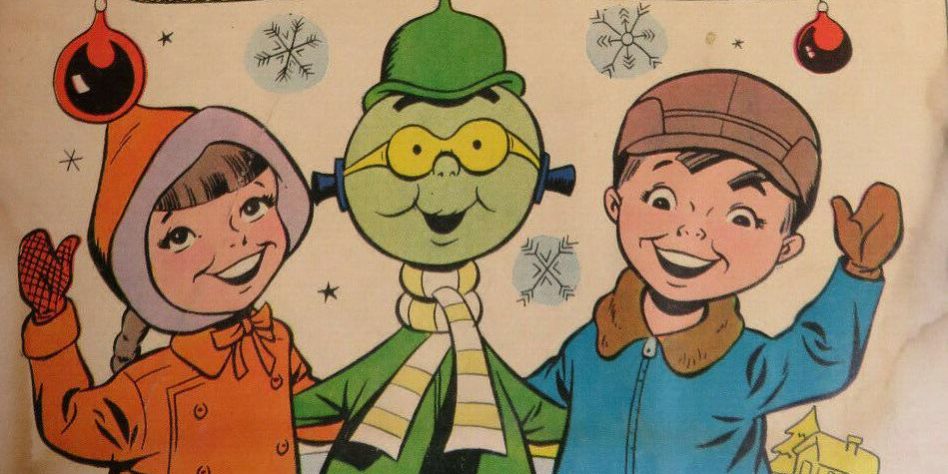 Welcome back to Consigned, Cool, & Collected! Every Monday, we stop to truly appreciate the cool collectibles items we handle every day and/or consider them in their proper cultural context. Today tends more towards the latter, where we’re looking at how a department store holiday giveaway fits into the larger trend of Santa Claus battling aliens. Yes, there’s more than just that one example you’ve immediately thought of – its not a cliche, but it’s not unique! 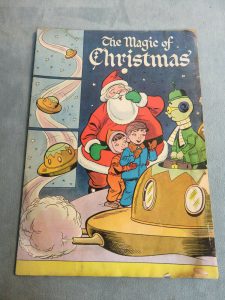 This nifty little Christmas comic, currently available in our eBay store, was given away by the George’s & Newport’s department stores of Pontiac, MI. There’s precious little information, at least easily found information, but either the stores of the publisher. We imagine that the Promotional Publishing Company of New York City didn’t just print these up for Michigan department stores, but one never knows.

The comic tells the story of a pair of youngsters named Tommy and Susie. While walking home one day, they witness a flying saucer land. J.B. Grook of the planet Mars gets out. He’s on Earth to research an Earth holiday, and picks the first people he sees as his sources. The kids proceed to tell him all about “the magic of Christmas” – how people all act a little nicer, smile a little easier, cheer a little more, are just generally the people that they always hoped they would be at Christmas time. Since this comic is meant to promote department stores, they also give him a lot of data about how cool department store Christmas displays are, how awesome it is to buy toys, et al. Grook leaves Earth with the intention of spreading holiday cheer on his home world. It’s a fun piece of holiday nostalgia from a (somewhat) simpler time.

But Santa doesn’t even get to meet the alien! Man, covers really do always lie. 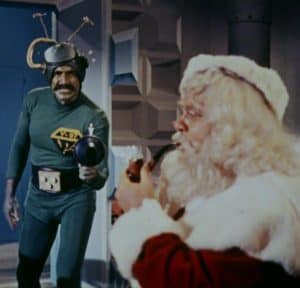 A still from Santa Claus Conquers the Martians that sums up the movie pretty well.

Nine years later, director Nicholas Webster and screenwriter Paul L. Jacobson fulfilled the promise of The Magic of Christmas in the form of a major motion picture. The end result was Santa Claus Conquers The Martians, a silly Christmas tale in which Martians conspire to kidnap Santa Claus. It seems that they need a jolly magical figure to instill Martian children with wonder, so they’ve elected to just steal one from the planet next door. Santa and a couple of Earth kids manage to foil the Martians’ plans to keep Kris Kringle on the red planet, and end up empowering kindly doofus Martian Dropo to be his world’s jolly giver of gifts.

This movie is legendary, in no small part thanks to its public domain status. It is a Christmas staple in the repertoire of horror hosts, up to and including the Mistress of the Dark herself, Elvira. It’s been riffed by Mystery Science Theater 3000, Cinematic Titanic, and RiffTrax. Most amusingly, it was a special feature on the American DVD release of the Finnish Christmas genre picture Rare Exports: A Christmas Tale. Dell Comics even put out a comic book adaptation in 1966, as part of their Movie Classics series.

I admit, I had not heard of this short story from legendary writer Harlan Ellison until I started researching this piece. I will let the synopsis from the Internet Speculative Fiction Database speak for it:

Secret Agent Kris Kringle must leave the North Pole to battle alien symbiotes who intend to take over the Earth by seizing control of the minds of prominent politicians and turning them evil.

If you’re anything like us, you’ve been seized with the sudden urge to seek that story out. It will most easily be found as part of the collection The Beast That Shouted Love at the Heart of the World. That collection also includes Ellison’s classic A Boy And His Dog, the basis for the 70s sci-fi flick of the same name. 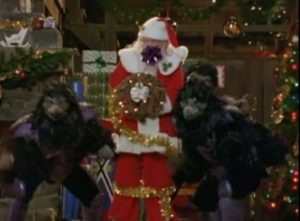 Santa: Not great in a fight.

The third season of Mighty Morphin’ Power Rangers featured the series’ second Christmas special, and the first to actually include the Power Rangers themselves. The episode, entitled “I’m Dreaming of a White Ranger”, featured the the Evil Space Aliens lead by Lord Zedd and Rita Repulsa conquering Santa’s workshop at the North Pole to distribute their own twisted toys to all of earth’s children.

Santa’s magic prevents the Rangers from transforming into their superpowered selves, leaving them to team up with Santa’s elves to pull off Home Alone style hi-jinks against the Evil Space Aliens. It’s an endearing bit of holiday fluff, and far from the last time Power Rangers and their space alien foes would encounter Santa.

Here’s a secret about me: I am a sucker for a superhero holiday story. Doesn’t even have to be that good as long as it tugs at the ol’ heart strings. And one of the absolute best such stories of all time is “Present Tense” by Ty Templeton (who Back to the Past wishes luck on his cancer battle). It’s a simple short story where Darkseid, God of Evil and ruler of Apokolips, throws his entire military might at a mystical figure that seeks to invade his palace. The assembled forces of darkness fail, and no less than Santa Claus himself arrives in Darkseid’s throne room. Breaking with his usual M.O., the jolly old elf hand delivers a piece of coal to the alien dictator before seeing himself out.

When you have a pop cultural icon like Santa Claus, content creators are going to find a way to play with them. And considering America’s nearly 75 year fascination with little green men, it’s not actually that surprising the two have crossed over now and again. Whether its in the form of TV, movies, comics, or books, this is the kind of stuff we love so much that we’ve made helping you sell it our life’s work.

Join us every Monday to find out about more stuff fit to be Consigned, Cool, & Collected.