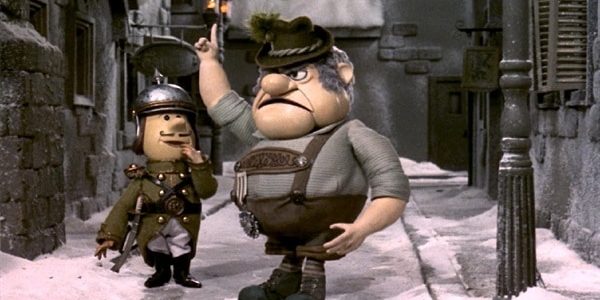 Welcome back to Hammer Drops! Every week, we teach you a lesson about value illustrated by recent auction items. This week’s lesson is a tad abstract, but one that’s worth knowing. It revolves around the various action figure sets based on the classic Rankin/Bass Christmas specials that sold in our 12/15 auction, how they relate to a cultural shift that happened around toys in the 1980s, and how all that relates to value. 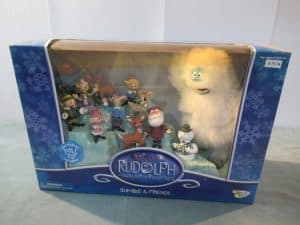 In 1964, Rankin/Bass Productions created an hour-long stop motion TV special for NBC. Based on the then-only-twenty-five-years-old story of “Rudolph The Red-Nosed Reindeer”, it told the story a young outcast reindeer and his adventures in the North Pole. It was an instant hit, and its re-airings quickly became a holiday tradition.

Rankin/Bass followed up that success with the traditionally animated Frosty The Snowman in 1969 and the stop-motion Santa Claus is Coming to Town in 1970. The latter is a sort of origin story for Santa Claus, featuring his childhood up through his decision to bring toys to all the world’s children. It and Rudolph are the basis for the action figure sets we sold last week.

All of those sets were produced in the 21st century. While Rankin/Bass kept making their iconic holiday specials into the 80s, their heyday really was 1965 to 1975. Why so late on the toys then? 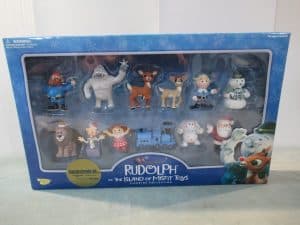 There are two key factors that go into why Rankin/Bass toys didn’t come around until they were niche collector’s pieces. The first is that the toy market was very different in the 60s & 70s. The term “action figure”, which describes the Rankin/Bass toys we auctioned off, wasn’t even coined until around the time Rudolph The Red-Nosed Reindeer aired in 1964. For the first fifteenish years of their existence, action figures were nigh-indistinguishable from fashion dolls like Barbie. They were 8″-12″ in scale, featured removable cloth outfits, kids could collect new outfits and accessories for them, etc. They were dolls for boys.

Until 1978. That’s when Kenner’s iconic Star Wars action figure line hit shelves and permanently changed what action figures looked like. They were 3.75″ in size, all plastic, with more vehicles and playsets than are feasible for larger figures. The smaller scale  and all-plastic construction also meant it was cheaper to produce a wide array of unique characters. The runaway success of the line proved that kids (well, their parents) were willing to spend the money “collect them all”, even as the line grew and grew 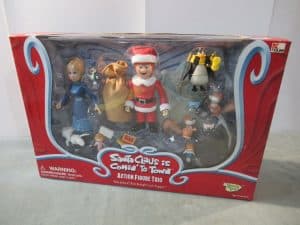 Hasbro followed suit in 1982 with G.I. Joe: A Real American Hero, copying Kenner’s scale and variety but adding more articulation. The once standard 12″ action figure was now a distant second in the market behind its smaller successor.

The second major factor is government regulation. While the film industry has always been self-policed, the Federal Communications Commission has regulated broadcast television since the beginning. This included setting the ration of broadcast content to advertisement on commercial TV. They, together with activist group Actions for Children’s Television (ACT), applied those regulations very strictly for children’s programming. For example, take ACT’s 1968 campaign against Romper Room. The series had licensed a line of toys and had begun showing segments where the show’s host would promote them. ACT maintained that this violated the standards set forth for the allowable amount of commercials, and the mere threat of FCC involvement made the show back down. That state of affairs ruled children’s television for more than a decade afterward.

And then Ronald Reagan was elected President of the United States, AKA the FCC’s boss. He believed in small government and a de-regulated economy, and appointed an FCC chairman that shared those values. He changed the regulations on advertising during children’s programming immediately. This paved the way for the 80s toy tie-in cartoon icons like G.I. Joe: A Real American Hero, Transformers, He-Man & The Masters of the Universe, and even Rubik The Amazing Cube. Heck, Rankin/Bass even got in on the action with Thundercats. 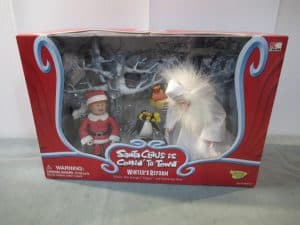 So why weren’t there are a lot of toys based on the Rankin/Bass Christmas specials? Because they would have been seen as tasteless at the time. Whereas today there’d likely be a full toyline based around something as predictably popular as an annually aired holiday special, back then the public would have loudly objected over turning an hour of children’s programming into a toy commercial. Additionally, the toys that the specials best lend themselves to didn’t yet exist. Part of the Rankin/Bass specials’ charm is their deep casts of memorable characters and stylized settings. Dolls and plushes, the primary figure toys of the day, wouldn’t have captured that nearly as well as modern action figures.

That said, the Rankin/Bass specials remain a beloved fixture of holiday pop culture, creating demand for collectibles based on them, which led to the action figure sets we sold at auction. They’re not crazy money, and we don’t pretend that they realize the same value as mint-in-box toys from the 60s and 70s would, but Rankin/Bass toys of that vintage don’t exist.

Point being, modern toys based on old cartoons is the kind of thing that somebody pulls out of grandma’s closet and slaps five bucks on at a garage sale. Sometimes, that’s for the best. But for toys like these, it would be leaving money on the table. That’s why you should turn to experienced eyes like ours at Back to the Past before you sell a collection. Or at least keep reading out tips each week in Hammer Drops!