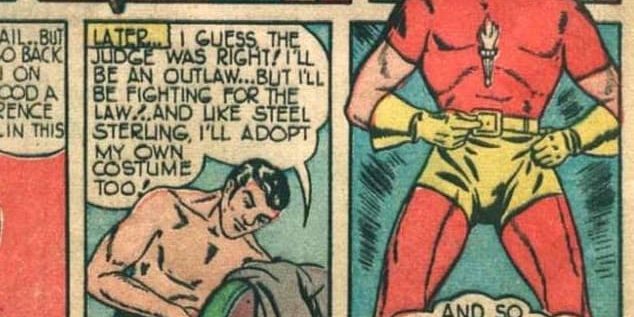 Welcome back to My Hero, wherein we here at Back to the Past tell you why the obscure characters from our custom action figure collection are great! Years ago, we purchased the life’s work of an artist and comic fan whose chosen medium was granting forgotten comic characters the action figure immortality denied to them by major toymakers. We’re still sorting through it all, and we’re making new finds every week! This week’s find, who will soon be available on ebay, is Inferno! He’s the third in a four part series we’re running on the Archie Comics superheros featured in the collection. 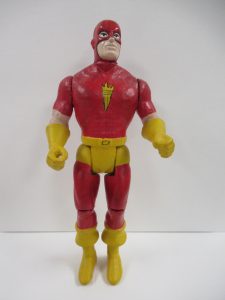 Inferno, as he appears in the Custom Figure Collection.

Inferno debuted in Zip Comics #10, published by Archie Comics’ forerunner MLJ Comics in 1941. Interestingly, he debuted as a villain. Crooked circus fire breather Frank Verrano’s criminal schemes brought him into conflict with the hero “Steel” Sterling. Burning breath is no match for steel skin, and the hero triumphed. Unusually, he gave his foe a chance to straighten up rather than dropping him in jail. Frank took it and adopted the costumed ID of Inferno, using his uncommonly strong fire breath to battle crime rather than commit it.

And that’s…basically all there is to say about him. Interestingly, “former circus performer” was a common enough origin for hero and villain alike in old comics. That includes sidekicks like Robin and Toro, heroes like Batwoman and Hawkeye, and villains like Ringmaster and The Canoneer. Comic writers of the 40s through the 60s thought circus folk were just kinda super, we guess.

A nice full body image of Inferno from MightyCrusaders.net

Inferno appeared in all of twelve issues in the Golden Age. His origins as the villain of another strip make him a bit of an oddity in the Golden Age canon. He’s a fascinating early example of shared continuity, as is The Comet and his brother The Hangman.But Inferno? He never made much of a splash – he’s had seven total appearances since the Golden Age!

But just look at him! That’s a costume that scream “superhero” at the top of its lungs. He’s been a favorite of Archie Comics’ pin-ups and crowd scenes in the last few decades, because he’s just so classic looking. A version of him was also one of the lead characters of DC Comics’ short-lived Red Circle imprint licensing the Archie heroes, but he didn’t have the costume. That’s a travesty!

Naturally, he was not one of the eight figures selected for Remco’s Mighty Crusaders line. Heck, he didn’t even appear in the 80s Mighty Crusaders comics! If you want him on your shelf, you need a custom figure like the ones in our custom action figure collection. Speaking of which, if you’ve got collection like it – be it original art, custom action figures, convention sketches, whatever – and are looking to sell it, get in touch!