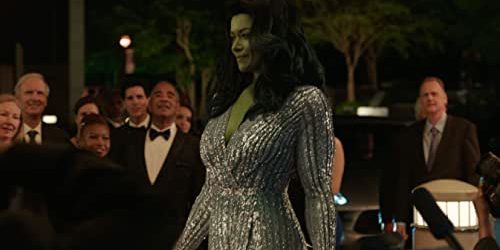 Marvel’s Incredible Hulk is best known for one thing: his rage! He’s an angry, grunting ball of anger that speaks in monosyllables and wrecks up whole towns! He’s a monster on the loose, a misunderstood one, but a dimwitted danger nevertheless.

Why does that dichotomy exist? Was it always that way? Well, we’re honoring She-Hulk: Attorney At Law‘s recent Disney+ debut by telling you all about it! Read on. 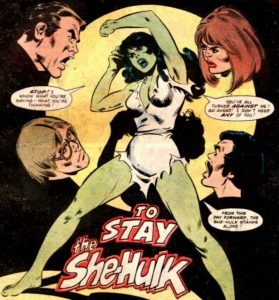 When Jennifer Walters debuted in Savage She-Hulk #1 back in 1980, her powers worked about the same as her cousin’s do. Any anger, no matter how inconsequential, could turn her green. One of her earliest transformations, in fact, came because the the District Attorney she was set to face off against in court was such an insufferable jerk! Jen ended up having to flee the courthouse before she changed.

Which was the biggest difference between the two in the early days: Shulkie had a secret identity! Early on, Bruce’s status as The Hulk had been outed to the authorities. From that point on, both Bruce Banner and his alter ego had been wanted fugitives. She-Hulk was a fugitive as well, with the LAPD suspecting her for several murders in early issues, but Jennifer Walters notably was not. While She-Hulk did her best to avoid the authorities, Jennifer Walters was capable of living a somewhat normal life. And that only got easier as the series progressed!

In Savage She-Hulk #9, Jennifer Walters had her blood examined by the foremost expert on blood disorders in the Marvel Universe: Dr. Michael Morbius! At the time, the doc had been temporarily cured of his “Living Vampire” status and was working under the radar at UCLA. He diagnoses Jennifer with a degenerative blood condition and immediately starts work on a cure.

She-Hulk’s first costume with The Avengers.

Unfortunately, the murders he committed while feasting on human blood are brought to light. Jennifer has to defend him in court, She-Hulk has to fight off vengeful loved ones of victims, and Morbius has to work on a cure under quite a bit of pressure. It all works out in the end, with Morbius getting a light sentence for diminished capacity and Jennifer cured. But not without some side effects…

The Sensational She-Hulk is Born!

Thanks to Morbius’ serum, Jennifer Walters gained control of her transformations. Complete control. She could become the She-Hulk at will and maintain her full intelligence. While Shulkie was always a bit brighter than Bruce’s alter ego, she wasn’t exactly able to practice law while green. After her solo title ended in 1982, this self-control helped earn her a spot with Earth’s Mightiest Heroes in Avengers #221. This is when she adopts her first superhero costume, a purple-and-white one-piece that influences her look to this day.

After the original Secret Wars, She-Hulk would be drafted into the Fantastic Four as a replacement for The Thing. While with them, she’d receive a direct dose of radiation and finds herself permanently in her She-Hulk form. Jen is actually pleased by this: she loves her statuesque She-Hulk bod, she loves the person she is when she is She-Hulk, the only real downside is that the petite half of her wardrobe has to be replaced.

And so that has, more or less, been She-Hulk’s status quo up to the present. More often than not, Jennifer Walters loves being a Hulk! She goes from being shy, nerdy, and easily overlooked to being a gregarious, fourth-wall-breaking amazon. That’s all upsides, really. 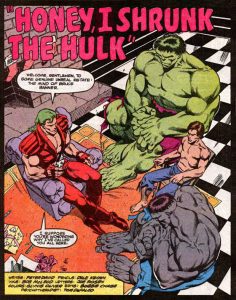 She-Hulk doesn’t have these issues.

When the trailer for She-Hulk: Attorney At Law debuted, some folks were mad. Look at this Mary Sue, who just takes to being the Hulk in a way that it takes Bruce Banner years to master! Except Jennifer Walters has always been better at being The Hulk than her cousin, even when she was still considered “Savage”.

The explanation for why comes from Peter David’s epic 12 year run on The Incredible Hulk. David spent a lot of time exploring why The Hulk was the way he was. The short answer is unresolved childhood trauma. The Hulk is less a monster contained inside Bruce Banner as it is one of his dissociative alters controlling his super powers. His Joe Fixit persona, also known as the intelligent Gray Hulk, is yet another such alter.

As a side-effect, this development explains why She-Hulk doesn’t have the same problems. Jennifer Walters didn’t have her cousin’s crappy childhood and didn’t end up with the mental illnesses and unhealthy coping mechanisms he struggles with. Basically no other “Gamma Mutate” experiences the wild mood swings and loss of intelligence that Banner does.

She-Hulk’s key issues have been trending positively in value ever since her show was announced. Key Professor Hulk issues have been doing the same since Avengers: Endgame. That said, there’s plenty of ground that the MCU could cover in the future: Shulkie’s tenure with the Fantastic Four, The Hulks status as supernatural Immortals, She-Hulk’s occasional lapses into savagery, et al. The best time to sell your Hulk, She- or otherwise, was before the show premiered. The second best time is right now, riding the wave of popularity that the show’s weekly airings will bring to the characters. If you’re ready to sell, we implore you to talk to us first: we’re here to help!