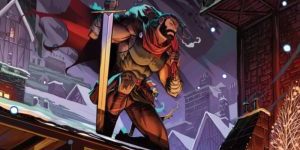 Merry Christmas and welcome back to Strange Times & Places! Today, we’re doing something a little different & looking at a re-imagining of folklore – Grant Morrison’s Klaus!

Gosh, that’s a hard one since there’s no one single “accepted” Santa Claus canon. Probably an Imaginary Story – in the words of Alan Moore, “Aren’t they all?”

Exiled fur-trapper Klaus returns to his hometown of Grimsvig to find that it has been brought to heel by the tyrannical Lord Magnus: he has banned children’s toys, he’s working men 24 hours a day in the coal mines, and generally promoting misery by cancelling the annual Yuletide celebration. The incensed Klaus takes it upon himself to bring joy back to Grimsvig, using his years of military and outdoorsman experience (with some help from forest spirits) to return toys & Yuletide celebration to Grimsvig under the cover of night. 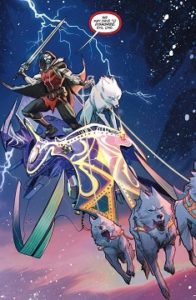 Bringing joy using a magic wolf sled and a broadsword.