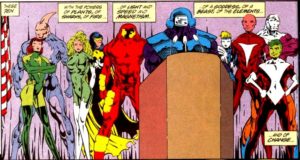 Welcome back to Strange Times & Places, where today we’re taking an active detour into the realm of poorly executed Elseworlds with Justice League International Annual #5, “No Rules to Follow”.

It’s a For Want of a Nail story, in which a world lacking in Men of Steel has a rocky relationship between human and metahuman.

The same basic idea would be explored in a much more satisfying way four years later in JLA: The Nail, which has the benefit of not being written by a noted scumbag. 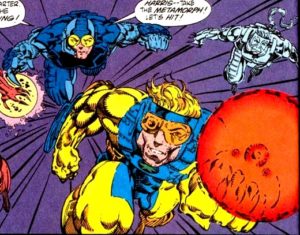 It’s a world that doesn’t trust metahumans, ten young superheroes from around the world band together as the Justice League in an attempt to rehab their community’s image. After several missteps at doing so (largely due to inexperience and lack of cooperation from authorities), billionaire Bruce Wayne funds the creation of a non-powered Control Squad to aid law enforcement by bringing in the League, prompting half of their ranks to go rogue.

Meanwhile, Ralph and Lois Dibny search for clues as to the whereabouts of a mysterious “Superman”, a selfless metahuman with godlike powers said to be in hiding… 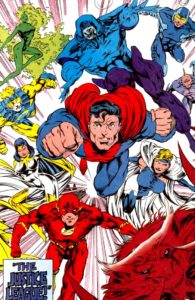