Who is the Bronze Age Superwoman? 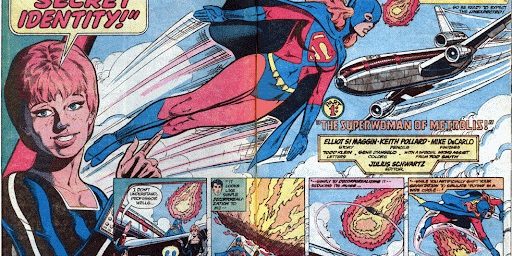 Welcome back to My Hero, wherein we here at Back to the Past identify and delve into the obscure characters from our custom action figure collection. Years ago, we purchased the life’s work of an artist and comic fan whose chosen medium was granting forgotten comic characters the action figure immortality denied to them by major toymakers. This week’s selection is one of the stranger additions to the Pre-Crisis Superman Family, Superwoman! 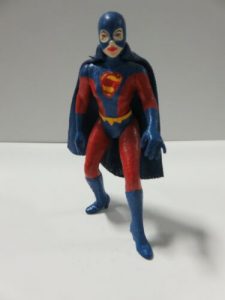 Kristin Wells is the Future’s Most Intrusive Historian

Introduced in the prose novel Miracle Monday by Elliot S! Maggin, Kristin Wells is a 29th century history grad student. She travels back to the 1980s who learn the origins of the universal holiday, Miracle Monday, which is known only to be tied to Superman. She infiltrates Clark Kent’s circle as Lois Lane’s personal assistant, but her status as a temporal anomaly lets her be possessed by the demon C.W. Saturn and used against Superman. Saturn’s goal is to force the Man of Steel to kill Kristin in order to banish the demon, thereby comprising his morals. This includes all manner of mayhem, like revealing Superman’s secret identity to the world. Nevertheless, Superman refuses to kill and the demon is defeated, having to grant his foe one wish before returning to Hell. Superman wishes that all the events since the demon’s arrival, the third Monday in May, be erased and the status quo restored. The vague feeling that something amazing happened that day remains, however, and Miracle Monday is born. Kristin goes home to share her findings and, presumably, confirm that we’re all obligated to the flow of destiny. 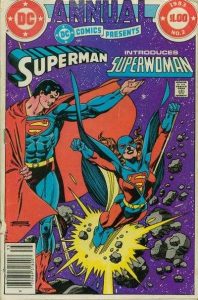 Kristen’s 1st Appearance as Superwoman. Our customizer chose not to include her hair for reasons unknown.

Kristin’s next bit of questionably ethical fieldwork happened in the pages of DC Comics Presents Annual #2. Her new subject is the identity of Superwoman, a mysterious figure in the history of Superman with powers that were impressive by 20th century standards but easily replicable with 29th century technology. Her investigation rules out basically every woman in Superman’s circle before Metropolis is attacked by time-traveling conqueror King Kosmos. Kosmos, being from a possible future, is ready for the likes of Superman and the Justice League but Kristin’s technology is from even further in the future than his. Taking up the Superwoman costume (which Lois had purchased for a costume party) for herself, Kristin uses 29th century technology to defeat King Kosmos. Thus solves another historical mystery with the answer “It was Prof. Wells, time-traveling.”

Kristin’s final major appearance was in DC Comics Presents Annual #4, where she decides its time to actually go live out Superwoman’s heroic career in the 20th century. She’s briefly incapacitated by time-travel-malfunction induced amnesia but regains her senses quickly enough to rescue the Man of Steel from a plot by Lex Luthor. Thus begins her superhero career in earnest…just in time for Crisis on Infinite Earths to erase her from continuity.

Fun Pre-Crisis comics like these are always popping up in our auctions, don’t miss them!

Where Is She Now?

Superwoman made all of two comic appearances right before Crisis, so it took a while for her influence to pop up again. In 2007, Superman met a Kryptonian refugee living on Earth under the name Kristin Wells in a three part story, but she left Earth for good at its end. 2009 would feature an even closer take on the character, with Lucy Lane wearing a powersuit that granted her Kryptonian powers as part of her father’s anti-Kryptonian military unit Project 7734. The suit looked like an updated version of Wells’, with the navy blue cape & cowl swapped out for a white hooded cloak and the suit’s blue accents (including cowl) being lightened. Kristen Wells, however, remains a Pre-Crisis relic and any fans who want her on their shelf will have to turn to the talents of customizers like the one behind the My Hero Collection. And if you’ve got collection like it – be it original art, custom action figures, convention sketches, whatever – and are looking to sell it, we would love to help you!